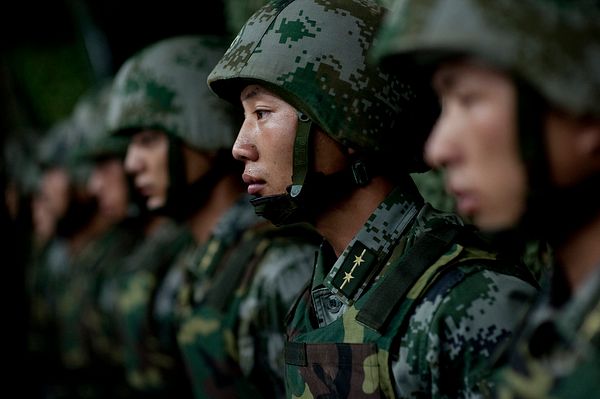 On China’s October 1 National Day holiday, while real-life People’s Liberation Army (PLA) fighter jets and other military planes sortied into the Taiwan Straits in record numbers, many Chinese celebrated by flocking to screenings of “The Battle at Lake Changjin,” breaking all box-office records. The 3-hour war epic commissioned by China’s propaganda department depicts a battle from the Korean War, where Chinese soldiers fought against the United States in what China calls the “War to Resist American Aggression and Aid Korea” (generally known abroad as the Korean War)

The film’s massive popularity arguably stems from China’s new view of war. Entering into military combat was formerly seen as a threat to the Communist Party’s hold on power. China’s military was not in a position to win. Going to battle and losing Chinese lives, even if it resulted in a territorial gain, was seen as potentially provoking a level of domestic unrest that could undermine China’s leadership. With the potential to topple the ruling party, war was off the table. Now it is perceived as a way to strengthen CCP’s position.

This new perspective on war is expressed not only by the very top and the elite levels of society but also by the people. It has led to a new breed of online influencers known as “military fanboys.” Another sign of the changing view is that going to war has become a common theme of China’s state–backed publications. According to the editor-in-chief of the state-sponsored Global Times, the Chinese people and their leaders believe that there is “no way that we can talk to the US with reason, we can only talk to the US with strength and actions.” This is a transformation in perspective that increases the possibility of war.

While the impetus for this change in perception can be debated, there is little doubt that the change has happened. The willingness to go to war is now portrayed as an expression of self-confidence and pride.

The timing of this new view of war might have been precipitated by the end of double-digit economic growth that had served as the foundation of the CCP’s pact with the Chinese people for almost 40 years. Notably, growth has consistently slowed over the past dozen years.

China’s new view on war could also be the next step in the decade-long process of regaining its self-esteem that began in earnest when China became the world’s second-largest economy in 2010. Prior to the 2008 financial crisis that began on Wall Street, China believed the West had many of the answers to prosperity. By 2010, the West still had not recovered and China was thriving with a huge budget surplus, leading Beijing to reconsider the best way forward for the Chinese nation.

Soon after Xi Jinping was appointed general secretary of the Communist Party and chairman of the Military Commission in 2012, he introduced “the Chinese Dream.” Based on the familiar term, the “American dream,” this concept of a better life was defined as “the goal of completing the building of a wealthy, powerful, democratic, civilized, and harmonious socialist modernized nation” by the 100th anniversary of the People’s Republic of China in 2049. Soon after, Xi linked the Chinese dream to “rejuvenation” as he declared: “Realizing the great rejuvenation of the Chinese nation is the greatest dream of modern China.”


Thus, the Chinese dream brought to the fore the long-promised “national rejuvenation” that would mark a full recovery from the 100 years of humiliation wrought on the Chinese people by Western powers, starting with the First Opium War in 1839. Reaching equal status to the world’s superpower by being able to stand up to U.S. military might would represent a major step in that long-hoped-for status of a proud nation returned to its historical position of global centrality.

Contributing to Xi’s ability to bring about national rejuvenation was the growth in his personal status within China. He slowly and conscientiously strengthened his position within the CCP. References to Xi as the “Great Helmsman” and the “Core” recognize his status as elevated above the former paramount leader, Deng Xiaoping, reaching the likes of Mao Zedong himself. Wielding a level of power arguably reaching that of Mao positioned Xi to bring about a transformation of both the Chinese people’s perception of war and China’s military capabilities.

Considering that China’s soldiers were all too young to have participated in battle, the idea of creating an army that would “fight to win” was not a given. It would require notable changes, such as Xi’s massive reorganization of the military that began in 2016. This included continued investment growth in military defense equipment. China’s 2021 defense budget, which was set at 1.36 trillion renminbi, represented a 6.8 percent increase from the 1.27 trillion RMB budget set in 2020, according to CSIS, a D.C.-based research institute. The new budget amounts to $209.16 billion at the current exchange rate. According to a 2020 report by the U.S. Department of Defense, the People’s Liberation Army Navy (PLAN) surpassed the United States Navy in total battle force ships, with 360 to America’s 297. In an analysis of the military implications of the recently inked AUKUS agreement, it is reported that China’s Huludao shipyard turns out a nuclear submarine every 15 months.

These statistics engender pride in the face of China’s historical memory of humiliation, contributing to the perception that going to war is no longer viewed negatively by the masses or the elites. Once seen as a fool’s errand, Chinese soldier fatalities, even in the face of territorial wins, were unacceptable. Now the opposite is true. Battling for territory is now a symbol of China’s strength and power. Whether due to a new economic normal or the next step in national rejuvenation, engaging in war will no longer undermine the authority of the Chinese Communist Party. Instead, it has the potential to strengthen its mandate as leader of the most populous nation in the world.

Perhaps that is why “The Battle at Lake Changjin,” depicting China defeating the United States against all odds in one of the major battles of the Korean War, has captured the imagination of a record-breaking number movie-goers. As the Global Times explains: “[T]he movie’s success shows the national feeling displayed in the film echoes the rising public sentiment in safeguarding national interests in front of provocations, which has great implications for today’s China-US competition.” That “rising public sentiment” could also have provided the motivation for the Communist Party to help produce and fund the film, to the tune of $200 million.