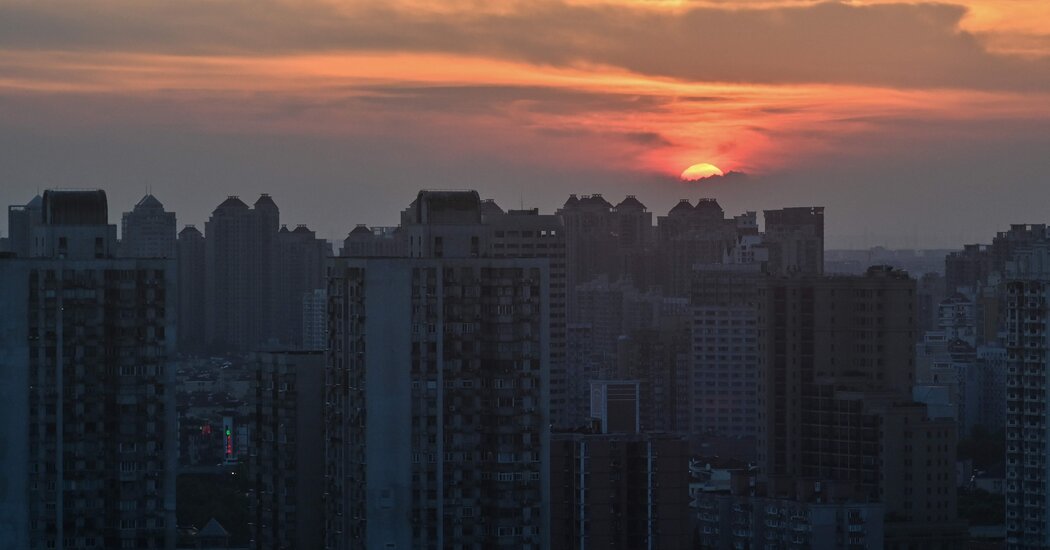 These are scary times in America, with one of our major parties careening into authoritarianism and the other having difficulty moving forward thanks to two uncooperative senators. Most of what I write, inevitably, focuses on the troubled prospects for our republic. But everyone needs a break. So today I want to talk about a happier topic: The risks of an economic crisis in China.

OK, not exactly happier. But a change in subject, anyway.

Warnings about the Chinese economy aren’t new — but until now the worriers, myself included, have been consistently wrong. Back in 2013 I suggested that China’s growth model was becoming unsustainable, and that its economy might be about to hit a Great Wall; obviously that didn’t happen.

Yet the more closely you look at how China has been able to keep its economy going, the more problematic it looks. Basically, China has masked underlying imbalances by creating an immense housing bubble. And it’s hard to see how this ends well.

The background: The reforms introduced by Deng Xiaoping at the end of the 1970s created an economic miracle. China, which was desperately poor, is now a middle-income nation, and given its size, that makes it an economic superpower. But China’s economic growth has been gradually slowing. Here’s a five-year moving average of the country’s growth rate:

There’s nothing mysterious about this slowdown. China was able to achieve incredibly rapid growth through a combination of technological borrowing from more advanced nations and a huge transfer of population from rural areas to cities. As its technological sophistication grew and the reservoir of rural labor shrank, growth was bound to slow. In addition, the one-child policy gave China the kind of demography we usually associate with richer countries: The working-age population peaked a few years ago and is now shrinking:

In and of themselves, slower growth and a demographic transition needn’t imply a crisis. But here’s the problem: Chinese spending patterns haven’t adjusted to the needs of a slower-growth economy. In particular, the country still has a very high savings rate, so to maintain full employment it needs to invest an incredibly high share of G.D.P. — more than 40 percent.

What drives investment? Normally, it depends a lot on how fast the economy is growing: growth is what creates a demand for new factories, office buildings, shopping malls and so on. So very high investment as a share of G.D.P. is sustainable if the economy is growing at 9 or 10 percent a year. If growth drops to 3 or 4 percent, however, the returns on investment drop. That’s why China really needs to change its economic mix — to save less and consume more.

But Chinese savings have stayed stubbornly high — and yes, excessive saving is an economic problem.

A few years ago a study from the International Monetary Fund tried to explain high Chinese savings. It suggested that the biggest culprit was the same demographic transition that is one cause of slowing growth: A declining birthrate means that Chinese adults can’t expect their children to support them later in life, so they save a lot to prepare for retirement. This demographic factor is reinforced by the weakness of China’s social safety net: People can’t count on the government to support them in their later years or to pay for health care, so they feel the need to accumulate assets as a precaution.

Chinese policymakers know all this, but somehow haven’t been able to deal with these underlying issues. Instead, they’ve kept the rate of investment very high despite slowing growth — mainly by encouraging huge spending on housing construction. A 2020 paper by Kenneth Rogoff and Yuanchen Yang shows that Chinese investment in real estate now greatly exceeds U.S. levels at the height of the 2000s housing bubble, both in dollar terms and as a share of G.D.P.:

Rogoff and Yang also show both that housing prices in China are extremely high relative to incomes and that the real estate sector has become an incredibly large share of China’s economy.

None of this looks sustainable, which is why many observers worry that the debt problems of the giant property developer Evergrande are just the leading edge of a broader economic crisis.

I’ve already pointed out that until now China has been able to defy the doomsayers. So you might be tempted to give Chinese policymakers the benefit of the doubt, and assume that they’ll manage to deal with this situation. It turns out, however, that they haven’t really been dealing with their economy’s underlying problems, they’ve been masking those problems by creating a housing bubble that will ultimately magnify the problem.

But why should the rest of the world care? China, which maintains controls on the flow of capital into and out of the country, isn’t deeply integrated with world financial markets. So the fall of Evergrande isn’t likely to provoke a global financial crisis in the same way that the fall of Lehman Brothers did in 2008. A Chinese slowdown would have some economic spillover via reduced Chinese demand, especially for raw materials. But in purely economic terms, the global economic risks from China’s problems don’t look all that large.

China does, however, have an autocratic government — the kind of government that in other times and places has tended to respond to internal problems by looking for an external enemy. And China is also a superpower. It’s not hard to tell scary stories about where all this might lead.

And with that, I return you to your regular worries about what’s going on in the United States.