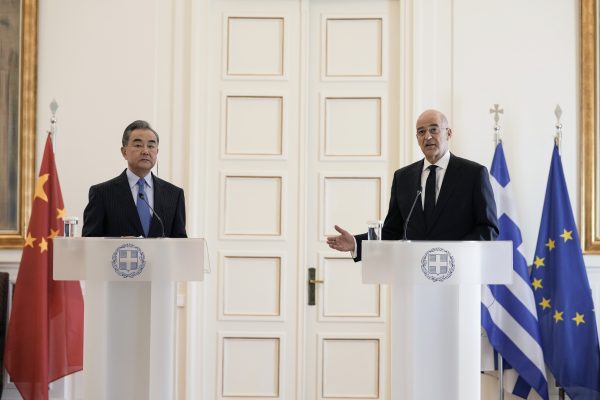 China’s Foreign Minister Wang Yi is in Europe this week, hoping to stem a downward slide in China-Europe relations. He started his trip in Greece and will visit Serbia, Albania, and Italy from October 27 to 29, ending his trip just ahead of the G-20 Summit in Rome. (China’s President Xi Jinping will not be attending the Rome meeting in person, continuing his 21-month streak of avoiding international travel.)

Wang’s Europe tour following a trip to Qatar from October 25 to 26, where he met with a delegation of the Afghan Taliban’s interim government.

Chinese Foreign Ministry spokesperson Wang Wenbin explained the logic behind Wang’s choice of destinations: “Greece, Serbia, Albania and Italy are important cooperation partners of China in Europe. China and these four countries boast profound traditional friendship, have close cooperation across the board and share fruitful outcomes in BRI cooperation.”

Greece, Serbia, and Albania are all part of the 17+1 mechanism, uniting China and 17 countries in Central and Eastern Europe countries (CEEC) – in fact, Greece was the 17th member to join, upgrading the format from its previous “16+1” moniker. Italy, meanwhile, is the only member of the G-7 to have signed on to China’s Belt and Road Initiative (BRI). It’s clear China sees these countries as safe bets for a friendly reception in Europe, as other members of the EU and 17+1 have begun to question the relationship.

Wang, the Foreign Ministry spokesperson, added, “This visit to the four countries by State Councilor and Foreign Minister Wang Yi fully demonstrates China’s willingness to consolidate bilateral friendship, deepen China-CEEC cooperation, and promote the healthy and steady development of the relations between China and the European side.”


In remarks before the press in Greece, Wang Yi said his trip was meant to “send three clear messages to my friends in Greece and Europe.”

“First, China hopes to work with Europe to carry forward the Olympic spirit”: Wang’s immediate priority, then, is to smooth the way for the Beijing Winter Olympics, set for February 2022. Critics have called for a boycott – whether a full-on refusal to send athletes or a softer diplomatic boycott – to protest China’s human rights abuse, particularly its mass detention campaign against Uyghurs and other Turkic ethnic groups.

In July, the European Parliament overwhelmingly passed a non-binding resolution called on the EU and its member states to refuse to send government representatives and diplomatic to the Beijing Olympics. Wang is hoping to avoid such an embarrassment.

“Second, China hopes to work with Europe to boost connectivity”: Europe is one of many regions to have soured on China’s BRI. Wang is attempting yet again to reassure Europeans that China’s development of infrastructure within Europe is a benefit, not a threat, to the EU. China is also keen to prevent EU criticisms of the BRI outside of Europe. In September, Europe unveiled its “Global Gateway” connectivity strategy, widely seen as a move to compete with the BRI.

“Third, China hopes to work with Europe to promote dialogue among civilizations”: This is the heart of all China’s outreach to Europe. Beijing desperately wants to keep Europe from joining a U.S. bloc against Beijing. Wang framed this as a desire to engage primarily with Europe as “representatives of … Western civilizations.” But that comes with the demand of “respect” for Chinese civilization – demonstrated, of course, through silence on China’s human rights abuses. “We hope that more European partners will join us in injecting stability and positive energy into China-Europe relations and international cooperation,” Wang said.

While the EU is also keen to avoid being drawn into an “anti-China” bloc, it has real concerns about the Chinese government’s behavior, both at home and abroad. Those concerns are only growing, as is the EU’s willingness to back them with action. Just months after the EU and China reached agreement on a bilateral investment deal, the EU froze consideration of the agreement after China placed sanctions on EU parliamentarians and researchers. China’s sanctions were a retaliatory move following EU sanctions on China over Xinjiang.

Meanwhile, the European Parliament just passed a resolution calling for closer ties with Taiwan, including looking into a EU-Taiwan bilateral investment agreement. The resolution had overwhelming support, with 580 votes in favor and just 26 against. By coincidence, Taiwan’s foreign minister, Joseph Wu, is also in Europe this week – he visited Slovakia and Czechia before heading to Rome for an October 28 event hosted by the Inter-Parliamentary Alliance on China. In an exclusive, Politico reported that Wu is also making a “hush-hush” visit to Brussels this week for as-yet unspecified engagements with the EU.

China is well aware of these developments, but it seems to want to pretend that relations with the EU can be continued as usual. In his conversation with the Greek prime minister, Wang repeated China’s refrain that “there are no fundamental conflicts of interest or geopolitical conflicts between China and Europe.” That statement can only be made by willfully ignoring criticisms, including from Josep Borrel, the EU’s top diplomat, that China is “undermining international rules,” engaging in “expansionism,” and “‘cherry-picking’ multilateralism.”

A recent incident in Greece served as to symbolize the current state of China’s convoluted relationship with Europe. The Olympic flame was lit in a ceremony in Olympia, Greece, to start the torch relay to Beijing for the 2022 Winter Games. Wang noted the event in his meetings in Greece as a positive sign for bilateral cooperation.

But the torch ceremony was disrupted by protesters who sought to call attention to China’s human rights abuses; they carried a sign reading “No Genocide Games” as well as a Tibetan flag. “How can Beijing be allowed to host the Olympics given that they are committing a genocide against the Uyghurs?” one protester shouted, her voice clearly audible in recordings of the ceremony.

The woman tasked with holding the Olympic torch, smile frozen on her face, pretended not to hear.