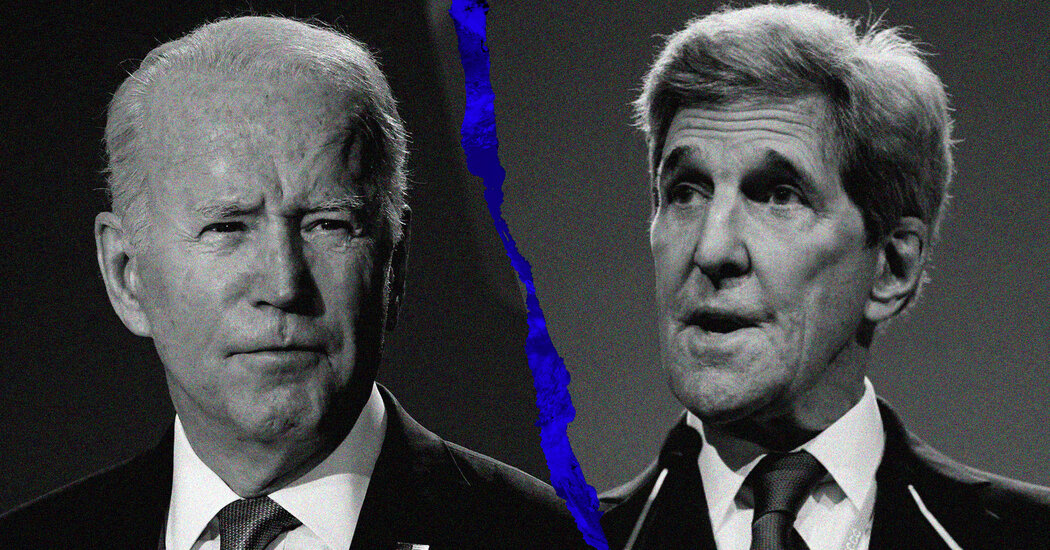 This article is part of the Debatable newsletter. You can sign up here to receive it on Tuesdays and Thursdays.

Six years ago in Paris, world leaders celebrated a breakthrough in global climate politics: After more than two decades of failure, nearly every country finally agreed to reduce “as soon as possible” the amount of planet-warming greenhouse gases they were pumping into the atmosphere.

Those leaders knew, though, that their pledges were woefully insufficient to avert disaster and would need to be ratcheted up at a later date. That is why they have gathered in Glasgow this week, and it also why John Kerry, the Biden administration’s climate czar, called the summit the “last best hope for the world to get its act together.”

So how’s the world doing? Here’s what people are saying about how to think about the summit, what “success” there might look like and what the implications will be for global climate politics if it isn’t achieved.

How many more degrees?

Global temperatures have already warmed by 1.1 degrees Celsius (2 degrees Fahrenheit) above preindustrial levels. A decade ago, the world was on pace to warm by a total of 4 degrees Celsius by the end of this century, an outcome widely seen as catastrophic.

But over the past 10 years, greenhouse gas emissions have been falling in many countries, including the United States. As a result, the end-of-the-century projection now hovers around 3 degrees of warming.

“There has been a genuine shift over the past decade,” Niklas Höhne, a German climatologist, told The Times’s Brad Plumer and Nadja Popovich. “You can say that progress has been too slow, that it’s still not enough, and I agree with all that. But we do see real movement.”

The reason for much of the movement is technological:

But scientists say the current trajectory is still nothing to celebrate. The United Nations climate science body recently warned that at sustained global warming levels between 2 and 3 degrees Celsius, the Greenland and West Antarctic ice sheets, which together hold enough water to raise global sea levels nearly 40 feet, could melt irreversibly for thousands of years until they virtually disappear. That would condemn future generations to a relentless rise in sea levels that would sink many of the world’s great coastal cities.

[“‘Bad For Humans’: The World Is On Track To Warm 3 Degrees Celsius This Century”]

To avoid such scenarios, Fred Pearce notes at Yale Environment 360, it is not enough for world leaders to keep promising net-zero emissions by 2050. They will have to take much more ambitious steps to slash their emissions by 2030.

At least 140 countries did make new commitments before Glasgow to do so. But even if countries follow through on these new commitments — and that’s a big if — the world could still warm by about 2.7 degrees Celsius by 2100. That is well beyond both the 2 degree limit enshrined in the Paris climate agreement and its aspirational target of 1.5 degrees.

“The good news is that the 2050 net-zero targets for the first time put the ‘well below’ 2 degrees and 1.5 limits of the Paris agreement within reach,” Höhne told Pearce. “But the bad news is that no single country is on target to implement the short-term 2030 policies needed to be on track to meet their own net-zero targets.”

In Foreign Affairs, the economist William Nordhaus argued last month that international climate policy has failed in part because of what economists call the “free rider” problem: The benefits of reducing emissions are broadly shared, but the costs — including, crucially, profits lost by leaving fossil fuels in the ground — are nationally borne, which incentivizes countries to rely, or free-ride, on others to take action.

When it comes to climate change, not all free riders are created equal. Today, the Group of 20 — 19 countries and the European Union that represent most of the world’s economic output — accounts for 80 percent of the world’s yearly emissions. Assign national responsibility for every ton of greenhouse gas that humans have put in the atmosphere since the Industrial Revolution, and the tally becomes even starker: One-quarter came from the United States, a share that’s slightly larger than the E.U.’s and about twice as large as China’s.

Because of this historical “climate debt,” many lower-income countries say their actions will depend on those of richer countries. Especially after President Donald Trump withdrew from the Paris agreement, many world leaders were eager to see President Biden come to Glasgow having secured some legislative achievement that matched his rhetoric on climate change.

But Biden has no such achievement in hand: His own party has pared back his climate plan working its way through Congress, stripping the legislative sticks meant to draw down the use of fossil fuels and leaving only carrots for the deployment of emissions-free energy. Those carrots could still “probably get us close” to Biden’s climate pledges, The Atlantic’s Robinson Meyer writes, but passage is far from guaranteed.

Opinion Conversation The climate, and the world, are changing. What challenges will the future bring, and how should we respond to them?

Aid is another factor at play. In 2009, rich countries pledged to give $100 billion a year to help poor countries address climate change, but they haven’t kept their promise. Diplomats from Canada and Germany last week expressed “confidence” the goal would be met in 2023.

But after a decade of inaction, that goal may now be out of date. “$100 billion a year is nowhere sufficient to adapt to the damages brought on by climate disruptions, let alone pivot the energy systems of poor countries away from fossil fuels,” The Times’s Somini Sengupta reports.

The ethical calculus of climate action is further complicated by the fact that some large developing countries have become major emitters. China is now the world’s largest, having surpassed the United States in 2006, with the European Union in third place and India in fourth.

China and India, in particular, have come under fire for not making bigger commitments ahead of Glasgow. In the near term, China has promised only that its annual emissions will peak sometime before 2030, which Kerry said “doesn’t advance the ball sufficiently.” India has not even set such a date, arguing that it is still much poorer than other major emitters and needs more time to develop.

It is because of these competing demands of fairness, political possibility and scientific necessity that climate diplomacy often finds itself at an impasse. “Leaders in China and India argue that when the U.S. and other countries were emerging from poverty in the past, they didn’t have to worry about what kind of energy sources they were using,” The Times’s David Leonhardt writes. But “If China cares as little about the planet as England did during the Industrial Revolution, everybody will suffer.”

[“China can make or break a global climate deal. What will it be willing to give?”]

Last week, Kerry’s message about the summit abruptly changed: “Glasgow was never going to be, you know, the definitive one meeting,” he said. “It was going to galvanize the raising of ambition on a global basis.”

Kerry’s reversal may be nothing more than an attempt by the Biden administration to save face. But he’s not alone in downplaying the summit’s significance. “I don’t want to categorically trash the [U.N. process] and throw the baby out with the bath water, but it’s time to be realistic about what it can and can’t do,” Jessica Green, a professor of political science who focuses on climate governance, told James Temple at the MIT Technology Review.

What’s the alternative? One, Temple writes, is something called “experimentalist governance,” a model in which smaller institutions and governments that don’t need global consensus can set binding standards that prompt broader changes in polluting industries. One example that proponents of “experimentalist governance” point to is California’s regulation of vehicle pollution, which arguably helped push automakers to develop electric vehicles.

“The hope,” Temple explains, “is that a variety of governments or regulators trying a variety of approaches can provide critical lessons on what does and doesn’t work, and drive a process that makes it cheaper and easier for other areas to enact emissions reduction policies and adopt cleaner technologies.”

Some of the technologies on which climate hopes get pinned are nascent, like carbon capture, and it’s not clear when or if they will ever reach mass commercial viability.

But for rich nations to shift away from fossil fuels “does not depend on huge scientific breakthroughs, welcome as they would be,” Leonhardt points out. “It can happen largely with existing technologies, like wind, solar and nuclear power and the electrification of vehicles.” And despite the free-rider problem, countries do have some self-interested reasons to reduce pollution from fossil fuels.