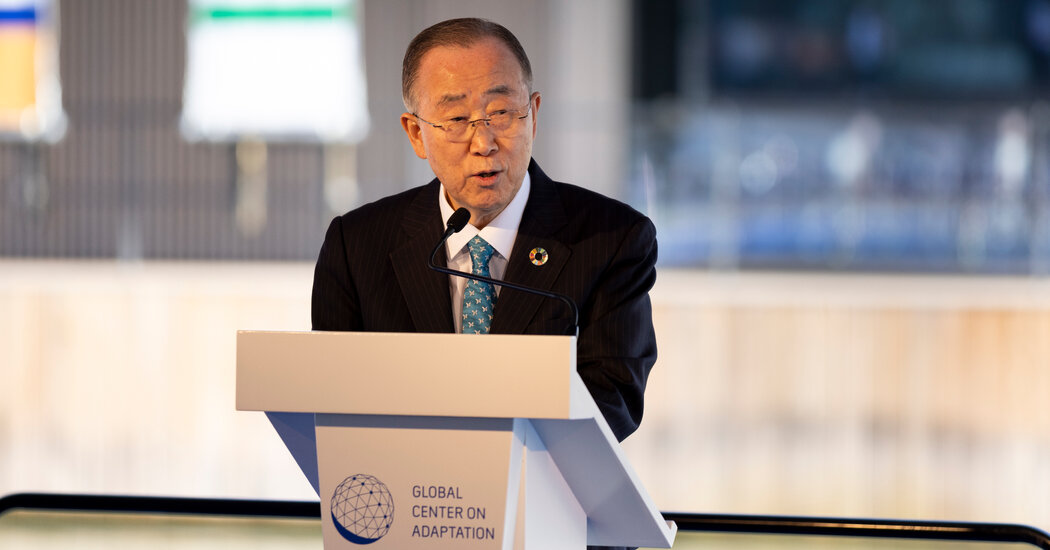 Global leaders must create jobs in the renewable energy sector so that the costs of transitioning from fossil fuels do not exacerbate economic inequalities, Ban Ki-moon, the former United Nations secretary general, said on Wednesday on the sidelines of the COP26 climate summit in Glasgow.

“What is absolutely necessary at this time — it is critical now — is for governments to increase their ambition level, not only in clean energy, but creating millions of new green jobs for the people,” Mr. Ban, the U.N. leader from 2007 to 2016, said at the opening of a Times event series running alongside the conference.

“I believe that we need to be more realistic about the winners and losers of globalization,” he said, “and take more decisive action in addressing inequality both within and between countries.”

Around the world, and especially in Europe, leaders are focused on the risks that a shift to a greener economy could lead to a backlash, particularly if working-class and middle-class people bear the brunt of the cost. Mr. Ban said there was a need to address the risks of the “underlying currents of populist skepticism.”

He called on industrialized countries to follow through on their pledge to give $100 billion a year to poorer countries to address climate change.

“They must be serious, because we have no time to lose,” he said.

Only some of that money, which industrialized countries agreed to last year, has been delivered.

Last week, diplomats from Canada and Germany said they expected the $100 billion to be delivered by 2023, three years late. Experts have said the amount will not be enough to help poorer countries with the costs of moving their economies away from fossil fuels and coping with damages brought on by extreme weather.

Mr. Ban said that he was disappointed that President Xi Jinping of China, the world’s largest emitter of greenhouse gases, was not attending COP26, but that he was encouraged by Mr. Xi’s vow in September that China would stop building coal-burning power plants overseas.

It is time, Mr. Ban said, for China, the United States and other countries to bridge “the gap between rhetoric and commitment.”