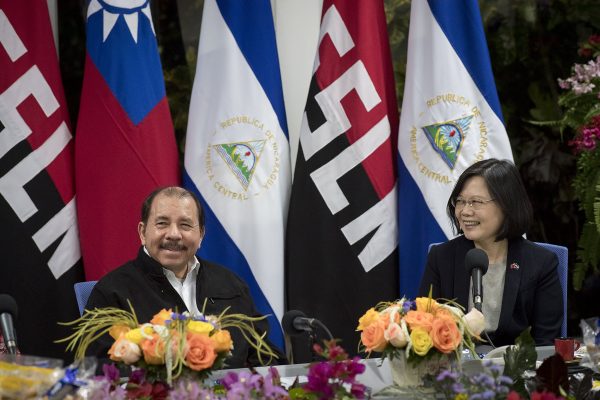 Early in the morning on December 10, Asia time, China and Nicaragua established diplomatic relations. The official “Joint Communiqué on the Resumption of Diplomatic Relations Between the People’s Republic of China and the Republic of Nicaragua” was signed in Tianjin, China, by Chinese Vice Foreign Minister Ma Zhaoxu and Laureano Ortega, an advisor for investment, trade, and international cooperation to Nicaragua’s President Daniel Ortega – and, more importantly, the president’s son.

According to China’s Foreign Ministry:

Taiwan’s Foreign Ministry expressed “extreme regret” at the decision and “strongly condemn[ed] the Chinese government for again coercing a diplomatic ally to sever relations with Taiwan and for suppressing Taiwan’s diplomatic space.”


“The Ministry of Foreign Affairs reiterates that Taiwan is not a part of the People’s Republic of China, and that the PRC has never governed Taiwan,” the Ministry said. “The Taiwanese people will not bow to pressure from China.”

Nicaragua’s decision drops the number of Taiwan’s diplomatic allies to 14, down from 22 when President Tsai Ing-wen took office in 2016. Prior to that, China and Taiwan had observed a so-called “diplomatic truce” under former President Ma Ying-jeou, wherein China refrained from courting countries that had ties with Taiwan. Beijing’s decision to resume picking off Taiwan’s diplomatic allies is one facet of its pressure campaign against Tsai and her Democratic Progressive Party.

“Nicaragua has resumed diplomatic ties with China without preconditions and stands on the right side of history,” Chinese Foreign Ministry spokesperson Wang Wenbin said in his regular press conference. “…The resumption of diplomatic ties between China and Nicaragua opens a new chapter of friendly cooperation between the two countries in various fields on the basis of mutual respect, equality and mutual benefit.”

In many ways, Nicaragua was low-hanging fruit for China, perhaps the easiest of Taiwan’s diplomatic partners to pull away. For one thing, a Chinese investor is behind the Nicaraguan government’s grand plan to build a $50 billion canal to link the Atlantic and Pacific Oceans. The Nicaragua Interoceanic Grand Canal plan has faced steep opposition at home and seems to have stalled out before it even really began – but with direct diplomatic ties with China, Nicaragua may be hoping to jumpstart the ambitious mega-project.

If the canal project served as an incentive, the cost of switching ties is less for Nicaragua as well. The United States has previously threatened to cut off aid to those who switch recognition away from Taiwan, a possibility codified into law under the TAIPEI Act of March 2020. In Nicaragua’s case, that prospect is not very threatening. The United States already has sanctions in place on Nicaragua over Ortega’s repression of dissent and what the U.S. State Department called “sham elections” held in November.

“[U]nder President Ortega and Vice President Murillo, the Nicaraguan government moves toward further isolation if it continues to undermine democracy and deny Nicaraguans their human rights,” U.S. Secretary of State Antony Blinken said in a November 15 statement. The new deal with China is Nicaragua pointedly striking back at that notion of “isolation.”

Indeed, Beijing has taken on the role of a patron saint of autocracies worldwide, both by attacking U.S. human rights advocacy as hypocritical and by subverting the very definition of “democracy” to include essentially any government that wants to claim the title. That’s clearly music to Ortega’s ears. It’s also a far cry from Taiwan’s approach, which has increasingly emphasized democratic values and human rights as a pillar of Taiwanese identity.

As a case in point, in its statement responding to Nicaragua’s decision Taiwan’s Foreign Ministry took special care to highlight “Taiwan’s accomplishments in freedom and democracy.” The Ministry pledged that “[o]ur government will firmly uphold national sovereignty and dignity, defend freedom and democracy, and work with the international democratic community to counter the expansion of authoritarianism.” That is most obviously a dig at China, but it works equally well as a jibe at Ortega.

Likewise, U.S. State Department spokesperson Ned Price emphasized Taiwan’s diplomatic bona fides in a statement to Axios about Nicaragua’s decision: “We encourage all countries that value democratic institutions, transparency, the rule of law, and promoting economic prosperity for their citizens to expand engagement with Taiwan.”

Taiwan under Tsai is pivoting toward emphasizing values-based diplomacy, including unofficial diplomacy with fellow liberal democracies that don’t  recognize the ROC government. That strategy will face a test in Honduras, whose new president-elect, Xiomara Castro, proposed establishing ties with Beijing during her campaign. However, ideologically Castro is a far better match with Taiwan: She won election, after all, on a platform of returning her country to democracy, promising “to form a government of reconciliation, a government of peace and justice.” Taiwan’s own journey from one-party dictatorship to democracy could offer valuable lessons for Honduras, if Castro can be convinced to keep ties intact.

Taiwan’s government was quick to reach out to her camp, with Tsai congratulating Castro on her election victory. Taiwan’s Foreign Minister Joseph Wu said earlier this week that Taiwan’s embassy in Honduras had “established contact with [Castro’s] campaign staff and the vice president-elect,” who “gave us their word that the diplomatic ties will not be affected.” Despite Wu’s reassurances, the prospect of a switch remains very much alive once Castro takes office in January 2022.

In the meantime, Wang, the Chinese Foreign Ministry spokesperson, had a message for Taiwan’s remaining diplomatic allies: “Sooner or later, these countries will establish or resume normal diplomatic relations with China… It is just a matter of time because this is an unstoppable trend of the times.”