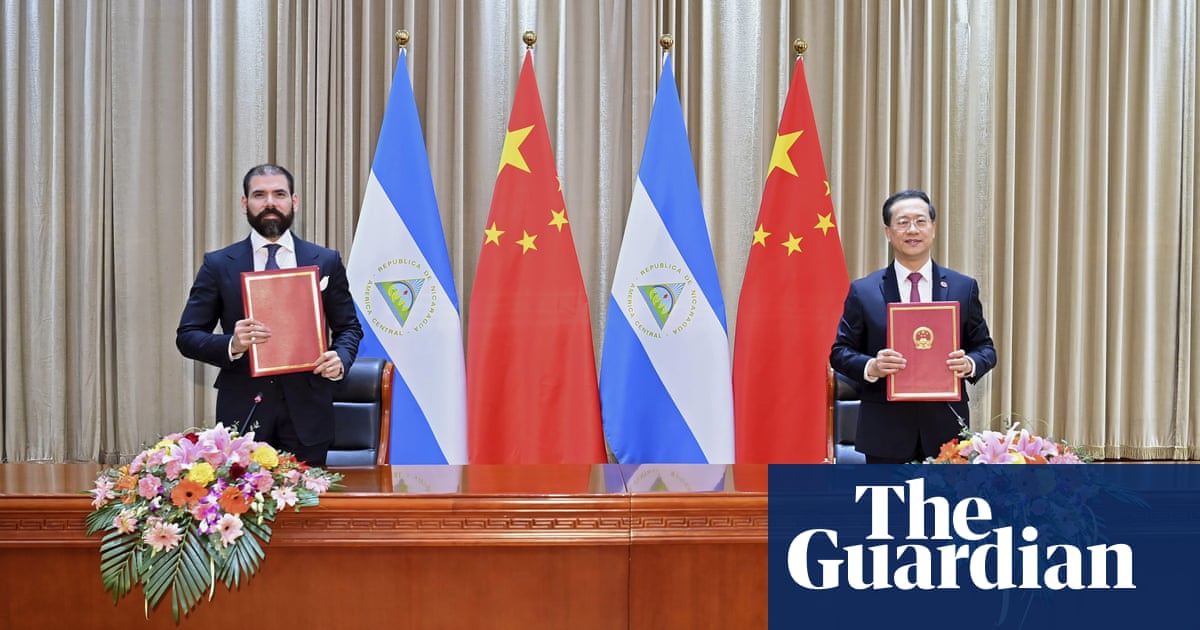 Nicaragua has switched diplomatic allegiance to China, leaving Taiwan with just 14 governments around the world that formally recognise it as a country.

The announcement by the Central American country’s foreign ministry also recognised Beijing’s claim over Taiwan as a Chinese province, a dispute that is at the heart of escalating tensions in the region.

“The government of the Republic of Nicaragua today breaks diplomatic relations with Taiwan and ceases to have any contact or official relationship,” said the statement issued in Spanish and English.

“The People’s Republic of China is the only legitimate government that represents all of China, and Taiwan is an inalienable part of the Chinese territory.”

The announcement came after a meeting in Tianjin between China’s deputy foreign minister Ma Zhaoxu and a Nicaraguan delegation led by President Daniel Ortega’s son Laureano Ortega Murillo, who is the presidential adviser for investments, trade and international cooperation.

The Taiwan government expressed “heartfelt pain and regret” over Nicaragua’s decision and accused the Ortega-led government of disregarding a “longstanding and close friendship” between the two peoples.

“Taiwan has always been a sincere and reliable friend to Nicaragua and has long worked with Nicaragua to improve the livelihoods of its people and assist with its national development,” it said, adding that it would immediately terminate relations from its side and recall all diplomatic staff “to safeguard national sovereignty and dignity”.

President Tsai Ing-wen dismissed Nicaragua’s rebuff, saying: “The more international support we have, there will be more pressure from the authoritarian camp.”

Zhang Jun, China’s ambassador to the UN, welcomed Nicaragua’s move, saying it was “in line with the prevailing trend of the time and people’s aspiration”.

China’s foreign minister, Wang Yi, said those still recognising Taiwan were doing so because of dollar diplomacy and pressure from the US.

“The US has adopted outside standards on this issue,” Wang said. “The US itself established diplomatic relations with China some 40 years ago. What right do they have in preventing other sovereign countries from making their own choices?”

After Taiwan (formally the Republic of China) was expelled from the United Nations in 1971 and the seat was transferred to the People’s Republic of China, most governments switched their bilateral ties, many under intensive lobbying by Beijing, which is hypersensitive to any alluded or actual recognition of Taiwan.

Taiwan and China have often traded accusations of using financial incentives such as loans and infrastructure investment in seeking to retain or gain formal allies.

The most recent transfers of recognition from Taipei to Beijing were by Solomon Islands and Kiribati, in September 2019. That decision has at least in part driven recent unrest in Solomon Islands.

El Salvador and the Dominican Republic switched in 2018, and Panama in 2017, after which it received waves of Chinese investment. This year Beijing was accused of offering Paraguay Covid-19 vaccines in return for switching recognition, which Beijing denied. Nicaragua had previously cut its 55-year-long ties with Taiwan in 1985 before re-recognising it in 1990.

Now just 14 governments, primarily in the Pacific and Latin American regions, maintain formal ties with Taiwan. After Nicaragua, many eyes are now on Honduras and its newly elected president, Xiomara Castro.

Not all those who recognise Beijing also recognise its claim over Taiwan. The Chinese Communist party says Taiwan is a Chinese province that will be taken by force if necessary, and that its leaders are separatists. Taiwan’s democratically elected government says it is already a sovereign nation with no need to declare independence.

Nicaragua’s switch comes at a time of deteriorating relations with the US, which is one of Taiwan’s strongest allies despite not formally recognising it.

Ned Price, a US state department spokesperson, criticised the decision by the Ortega government, which he said had no mandate after a “sham election” in November.

“Without the mandate that comes with a free and fair election, Ortega’s actions cannot reflect the will of the Nicaraguan people, who continue to struggle for democracy and the ability to exercise their human rights and fundamental freedoms,” he said. He urged democratic countries around the world to “expand engagement with Taiwan”.

China recently took diplomatic and trade action against Lithuania after its government agreed to open mutual diplomatic stations with Taiwan, which included “Taiwan” in the office name.

This week the US invited Taiwan delegates, but none from China, to a democracy-themed summit, prompting days of Chinese state media outrage and government propaganda declaring China was a superior democracy.