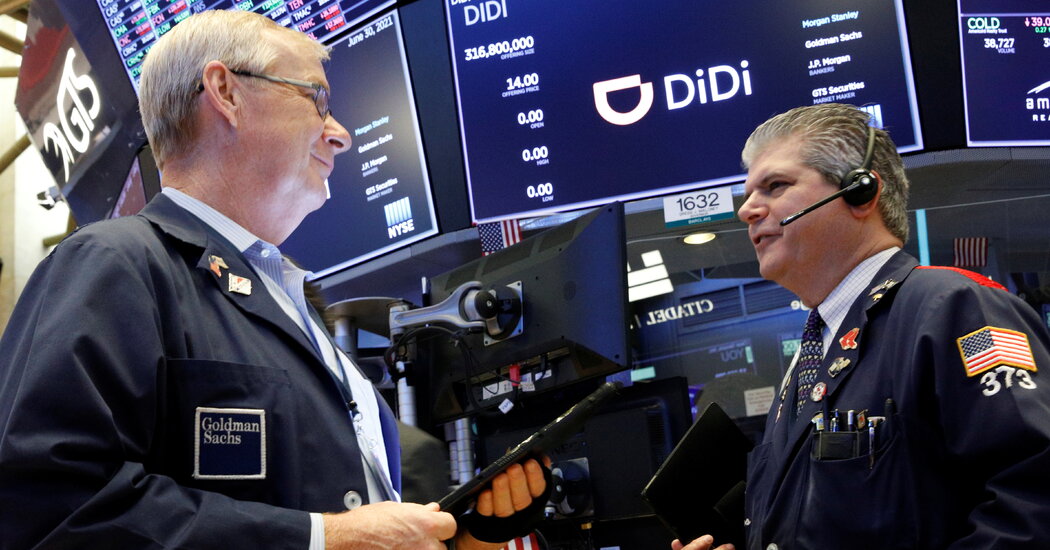 When the Chinese ride-hailing giant Didi Chuxing decided to delist its shares in the United States, it was an abrupt reversal that illustrated the growing rift between Wall Street and China’s rapidly growing corporate sector.

Barely six months ago, Didi had been the latest Chinese start-up darling to go public on the New York Stock Exchange, following the path of such companies as Alibaba and Baidu to list its shares in the world’s premier financial hub.

Now Didi’s move to relocate its listing to the Hong Kong stock exchange almost certainly heralds more departures, and few other Chinese start-ups are likely to pursue an I.P.O. in the United States any time soon.

Combined with banks’ growing footprint in China and Beijing’s increasing control over Hong Kong, it adds up to a simple truth: American investors will still have little trouble handing over their money to Chinese companies, but it will have to be on China’s terms.

“I don’t think the access to China has changed at all,” said Ben Emons, managing director of global macro strategy at Medley Global Advisors. American investors, he said, will just be subject to Chinese financial regulation — and many companies are undeterred by Beijing’s trade and financial policies.

The fine line that Wall Street power players will have to walk has been clear over the past month: Jamie Dimon, the chief executive of JPMorgan Chase, the country’s largest bank, and Ray Dalio, the billionaire founder of Bridgewater Associates, the world’s largest hedge fund, both walked back comments about China. Mr. Dimon said he regretted a quip that JPMorgan would outlive China’s Communist Party, and Mr. Dalio sought to clarify his support for human rights after he initially likened China’s approach to that of a “strict parent.”

Chinese companies and American investors have long seen the other’s allure: Investors envisioned fortunes to be made from China’s rapid economic growth, and companies coveted the deep pockets and cachet of overseas investors.

But the long, uneasy trade relationship soured badly in recent years. The Trump administration accused China of unfair trade policies and claimed that the mobile giant Huawei was stealing technology from Western rivals. At the start of this year, China Telecom, China Unicom and China Mobile were delisted by the N.Y.S.E. to comply with an executive order that barred Americans from investing in companies with ties to the Chinese military.

At the same time, U.S. regulators have grown increasingly worried about methods Chinese companies use to list themselves in the United States.

Chinese law largely forbids foreign investors to own shares of Chinese companies in certain sensitive industries, so many instead use variable interest entities — essentially shell companies, often set up in places like the Cayman Islands. Investors buy a piece of those shell companies through what are known as American depositary receipts, or A.D.R.s.

Neither American nor Chinese regulators like A.D.R.s. They provide Chinese corporations with a way to evade the intent of Chinese securities laws, while U.S. regulators say they lack transparency for investors. Last week, the Securities and Exchange Commission adopted rules that would require those listed in the United States to further open their books to American accounting firms or get kicked off U.S. exchanges.

“It’s a point on which the U.S. government and China seem to be aligned in that they don’t want them,” said Dan Chace, a portfolio manager at Wasatch Global Investors, a Salt Lake City investment firm. Mr. Chace said his firm had switched to buying listings in Hong Kong earlier this year to “save ourselves the headache of all these questions.”

But avoiding such headaches will mean investing under regulatory systems controlled by Beijing, not Washington.

China has been forceful in its oversight of many companies including Didi, which faced privacy and cybersecurity investigations almost immediately after it went public. Regulators there stopped the company from signing up new users, then ordered it off app stores in a span of two days. Beijing also targeted other U.S.-listed firms for cybersecurity reviews: Full Truck Alliance, whose apps connect freight customers and truck drivers; and Kanzhun, which runs a job-hunting platform called Boss Zhipin.

“We can’t look an investor in the eye and tell them to own Chinese tech today,” he said. The action taken against Didi, he said, “shows the hazards of investing in China at a time when Beijing is really starting to close in the walls.”

But while China is regulating its tech companies more aggressively, it’s also updating the way it handles its banking and financial sectors, said Mark Rosenberg, chief executive of GeoQuant, a political risk analysis firm in New York and adjunct professor at Columbia University.

“In part, that is designed to make China a more attractive capital market so that tech companies like Didi can list in Hong Kong and Shanghai, and international investors can invest there,” Mr. Rosenberg said.

While Chinese companies have debuted in the United States to great fanfare — Alibaba’s $25 billion I.P.O. was a record in 2014 — they represent only a fraction of the companies that list on U.S. exchanges. As of October, there were 282 Chinese stocks listed in the United States, valued at roughly $1.7 trillion, according to research from JPMorgan Asset Management. That’s a bit more than 3 percent of the value of the entire U.S. equity market.

And the 37 Chinese companies that made initial public offerings on U.S. exchanges this year accounted for just 4 percent of total new listings, according to data compiled by Dealogic.

Even if Chinese firms abandoned U.S. exchanges, it would hardly make a dent. “From the business perspective, it’s not a big deal,” said Owen Lau, a research analyst covering exchanges for Oppenheimer, an investment banking and research firm in New York.

Banks have long made only limited profits in China, which for decades has required that they share their winnings with local partners. But banks have been pushing to build up their businesses there — a push that Beijing is increasingly embracing.

This year, China granted approval for Citigroup to open a custody business in the country, essentially acting as a bank for Chinese investment funds. The government also gave the green light to JPMorgan Chase and Goldman Sachs to take full ownership of their investment banking and trading businesses there, after decades of waiting.

But American financiers and investors aiming for big profits from China should proceed with caution, said Dick Bove, a veteran banking analyst at Odeon Capital Group.

Didi’s decision to delist “increases the risk that if the U.S. banks obtain meaningful positions in the Chinese market that China will kick them out,” he said.

As for investors, Mr. Bove said, “who the hell now wants to invest in a Chinese company, if all of a sudden, China’s going to pull a company out of whatever exchange it’s on?”