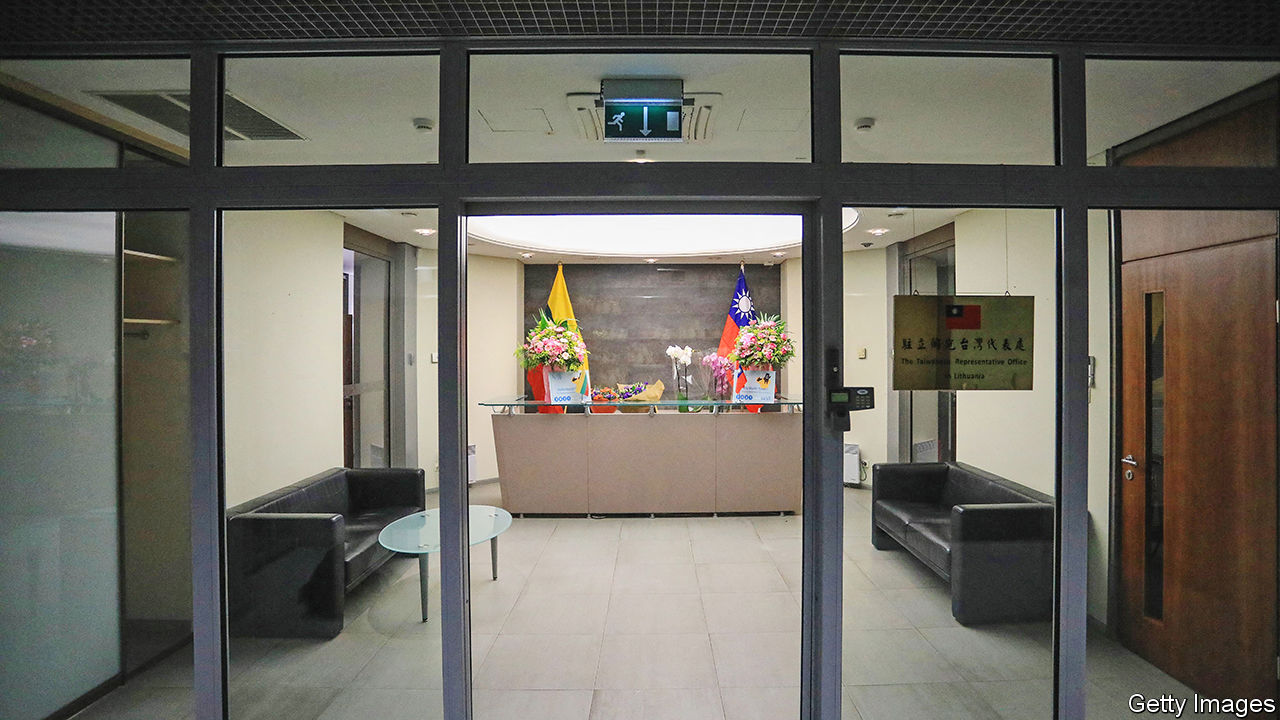 ONE OF THE Chinese government’s favourite pieties is to warn Western democracies against starting a new cold war. A peaceful world needs more “win-win” co-operation, intone Communist Party officials, not more ideological cliques. This winter those words ring hollow in Beijing’s embassy districts. On the diplomatic frontline, it is China that appears to have launched an undeclared cold war. It seems confident of winning.

An early skirmish took place on December 15th, when the small Baltic republic of Lithuania withdrew all its diplomats and their dependants from Beijing “for consultations”, leaving its embassy locked and empty. Their evacuation followed an escalation of a months-long Chinese pressure campaign, aimed at punishing Lithuania for allowing the democratic island of Taiwan to open a representative office in its capital, Vilnius. China calls the Taiwanese office an affront to its sovereignty, since it claims Taiwan as its own territory.

The evacuation was not undertaken lightly. The shuttering of the embassy, which Lithuania insists is not closed for good, is the worst crisis in relations between China and a European state since 1981. That year the Chinese ambassador to the Netherlands was recalled in response to the sale of Dutch submarines to Taiwan. Sino-Dutch ties remained downgraded for three years. Lithuania has been without an ambassador in Beijing since September, after China asked its envoy to leave. In November China unilaterally declared that each country’s respective embassy would be demoted to an office headed by a chargé d’affaires, or caretaker.

Lithuania’s diplomats were given until December 14th to hand in their Chinese identity cards to have them changed to reflect their mission’s diminished status. Not knowing whether the staff would retain diplomatic immunity, and not accepting its embassy’s demotion, Lithuania told all diplomats and dependants to keep their cards and leave the next day on an Air China flight to Paris. In scenes worthy of a cold-war thriller, the Lithuanians duly gathered beside a busy ring road near their embassy on a grey mid-week morning. The evacuees—tense-looking adults, teenagers in headphones and a pet cat in a crate—boarded a coach, watched by plain-clothes police. Colleagues from friendly embassies gathered to offer an escort to the airport.

To hear Chinese officials tell it, any looming cold war is the fault of America, an enfeebled yet vicious bully which is scheming to thwart China’s rise. State media say Lithuania, a country of 2.8m people, is surely too small to decide to defy China alone, and charge that it was either trying to curry favour with America or heeding American orders. In truth, similar suspicions once circulated among European Union governments, especially during Donald Trump’s presidency, when American officials roamed the world urging allies to defy China.

But the Baltic republic points to its long history of standing up to bullying foreigners, including Nazi Germany and the Soviet Union. In 2019 Lithuania denounced China’s embassy there for rallying people to disrupt a protest in support of Hong Kong’s democrats (Chinese diplomats were photographed handing out banners). In 2021 Lithuania announced its withdrawal from the “17 plus one”, a Chinese-led grouping of former communist countries in central and eastern Europe, calling it divisive.

There was some grumbling among EU politicians and officials when Lithuania first announced the opening of a “Taiwanese Representative Office” in Vilnius. Did Lithuania really have to approve that particular name, fellow Europeans muttered? After all, China tolerates overseas trade offices that are named after Taiwan’s capital, Taipei. The mood now is different. China’s eagerness to use undeclared forms of economic and diplomatic coercion is breaking new ground. In contrast with the cold war against the Soviet Union, the concern is not that China is bent on exporting revolution or overthrowing global capitalism. Instead, China is seen as a disrupter of the rules-based order: willing to use instruments of commerce and diplomatic intercourse as weapons, even as Chinese leaders talk up multilateralism and free trade. China’s treatment of Lithuania follows a pattern seen in recent bilateral disputes with American allies. Among them are Australia and Canada, which have suffered unacknowledged trade boycotts and seen citizens imprisoned as hostages in bilateral disputes. Before that, it was the turn of Japan and South Korea to face undeclared economic sanctions for displeasing China.

For some weeks, importers have been unable to list Lithuania as a country of origin in Chinese customs databases, making it impossible to clear shipments (Lithuania does not export much to China, however). German and French firms have been warned that they may not ship goods with Lithuanian components to China, potentially blocking hundreds of containers already in transit. There are rumours that the People’s Bank of China, the central bank, has forbidden banks from issuing letters of credit covering trade in or out of any Baltic port. When EU officials raised these concerns, Chinese authorities retorted that Lithuania is lying and that the EU should beware of being taken hostage by a tiny troublemaker.

In its desire to punish Lithuania, China is betting that bigger EU powers will think of China’s market and abandon the Baltic minnow. In doing so, China overlooks the extent to which small or mid-ranking European countries have a horror of a world in which great powers set their own rules. Europeans loathed Mr Trump for his America-first trade policies. They detest China-first bullying just as much, especially when it threatens the integrity of the European single market.

First they came for Lithuania
In EU councils even Hungary, which is normally friendly to China, is speaking up for Lithuania. On November 30th France’s president, Emmanuel Macron, told Lithuania’s, Gitanas Nauseda, that France sees engagement with major powers as a vital interest—but puts a higher priority still on EU solidarity. On December 8th two senior EU officials warned that the apparent trade ban, if confirmed, may put China in breach of its World Trade Organisation obligations. In the same week the EU unveiled new instruments to retaliate against economic coercion by third countries. Free-traders within the bloc have doubts about whether such tools can work. But those same governments are also troubled by China’s behaviour.

When the new German chancellor, Olaf Scholz, has his first bilateral call with Xi Jinping, China’s president, Lithuania will surely be on the agenda. All in all, 2021 ends with Europe-China relations in dire shape. Pessimistic envoys in Beijing worry that Chinese leaders do not care. They fear that the regime is intoxicated by nationalism. They also detect a conviction that it is the destiny of a rising China to struggle with a fading America. Solidarity with Lithuania may prove fleeting; Europeans may start accommodating China on other issues. But the chasing of an embassy from Beijing will not be quickly forgotten.