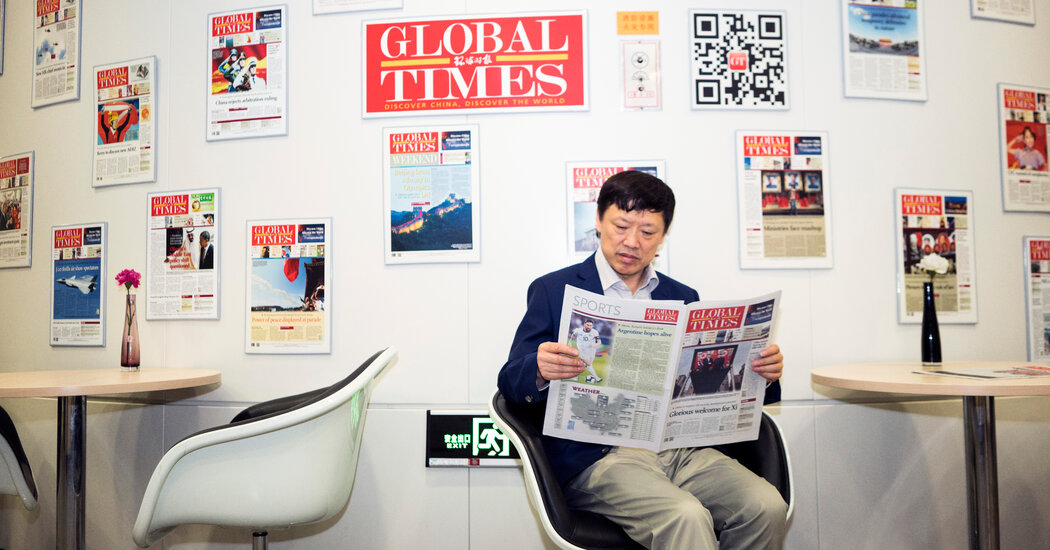 During the presidential administration of Donald J. Trump, Mr. Hu would often work late, firing off rejoinders at the U.S. president’s tweets. Other Chinese diplomats and state media journalists followed, taking to American social media platforms blocked in China to hit back at Beijing’s critics. In the process, they have at times stirred international controversy and inflamed relations with other countries.

Growing up in Beijing, Mr. Hu was not always the picture of party loyalty. As a Russian literature graduate student in 1989, he joined the crowds of pro-democracy protesters who gathered in Tiananmen Square. He has since distanced himself from the demonstrations, saying that he was misled by pro-democracy intellectuals, whom he has called childish and impulsive.

Taking over the Global Times in 2005, he thrived, even as China has repeatedly cracked down on media freedoms, jailing journalists and shuttering independent media. His occasional criticisms of the government have been balanced by patriotic salvos on Twitter, which he often reposted on Chinese social media, as if to show he was defending the country internationally.

A tense era in U.S.-China ties. The two powers are profoundly at odds as they jockey for influence beyond their own shores, compete in technology and maneuver for military advantages. Here’s what to know about the main fronts in U.S.-China relations:

Pacific dominance. As China has built up its military presence, the U.S. has sought to widen its alliances in the region. A major potential flash point is Taiwan, the democratic island that the Communist Party regards as Chinese territory. Should the U.S. intervene there, it could reshape the regional order.

Trade. The trade war started by the Trump administration is technically on pause. But the Biden administration has continued to protest China’s economic policies and impose tariffs on Chinese goods, signaling no thaw in trade relations.

Technology. Internet giants have mostly been shut out of China, but plenty of U.S. tech companies still do big business there, raising cybersecurity concerns in Washington. Mr. Xi has said China needs to achieve technological “self-reliance.”

That conduct helped him retain his status as a trusted party stalwart and conduit for the outlook of Beijing’s buttoned-up top leadership. Investors, diplomats and political pundits in China and the United States alike often scoured his posts for hints of what Chinese leaders might be thinking, though opinions vary over how much the tabloid’s bellicose editorials represented Beijing’s attitudes.

In recent years, Mr. Hu has occasionally found himself on the wrong side of the nationalism he helped to inculcate. This year, as India struggled to deal with a coronavirus outbreak, Chinese state media mocked the tragedy, posting an image of a Chinese rocket about to launch next to one of mass cremations with the title: “Chinese ignition versus Indian ignition.”

When Mr. Hu condemned the meme for damaging China’s reputation in India, another nationalist pundit pushed back, suggesting China should not worry about flexing its political muscles and deriding critics who worried about the image with a coarse term that is roughly equivalent to “pearl clutchers.”