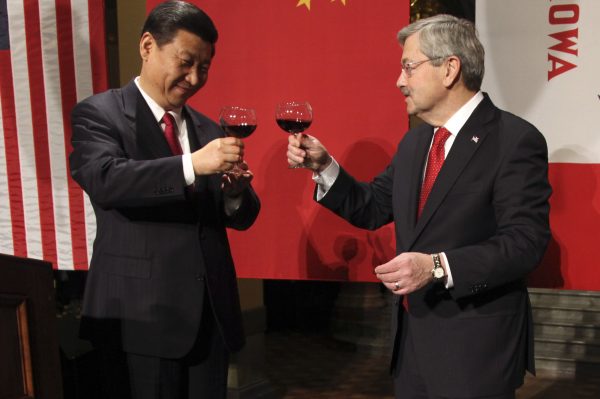 In 1985, the small farming town of Muscatine in Iowa hosted a young Chinese delegation seeking to learn about agricultural techniques. The group’s leader, then Communist Party secretary of a rural county in Iowa’s sister state of Hebei province, forged deep connections with the local community and was awarded a golden key by then Muscatine mayor.

Twenty-seven years later, in 2012, Xi Jinping, the previous delegation leader, who had become vice president of the People’s Republic of China, announced his decision to take a trip back to Iowa in a policy speech delivered in Washington, D.C., during his U.S. visit. Xi said: “I’m going to tell my old friends in Iowa that the golden keys presented to us by the representative of the Muscatine city hall symbolized the opening of local exchanges and cooperation between our two countries.” He continued: “Once open, the door to local exchanges and cooperation between China and the US cannot be closed by any force. On the contrary, it will only open wider and wider.”

Subsequently, at the choreographed reunion, Xi reportedly told his “old friends” in attendance: “You are the first Americans I have ever met in my life. For me, you are my first impression of the United States.” Muscatine’s mayor then awarded a second golden key to Xi and said: “In the history of the city of Muscatine, you’re the first one who has ever been awarded two golden keys. This shows the special friendship between us, of which we are very proud.”

This anecdote has been widely covered and referenced in Chinese state media, in recent years in particular, as a signature story of China-U.S. subnational (state, local, and people-to-people) exchanges. It also reflects the strategic importance of subnational relationships, or friendships as they are defined in CCP parlance, in Xi’s view of China-U.S. relations. As he noted on February 17, 2012 at a China-U.S. Governors’ meeting held in Los Angeles that he and then-Vice President Joe Biden attended, China-U.S. cooperation at local levels has “strong demands, solid foundations, and broad prospects.” Xi went on to emphasize: “since the establishment of China-U.S. relations 33 years ago, productive local exchanges and cooperation has always been an important basis and driving force supporting the development of bilateral relations.” This held true also after he rose to power as CCP chief in early 2013.


On May 28, 2013, Xi met with then-mayor of Los Angeles and stressed the importance of “starting from the bottom up” to “promote the development of China-US relations.”

In recent years, under Xi’s leadership, subnational diplomacy in China-U.S. relations appears to have become a key area of research at Tsinghua University’s Department of International Relations.

On May 17, 2013, the department hosted a symposium launching a research project focusing on “Subnational Governments and China-U.S. People-to-people Exchanges.” Zhao Kejin, director of Tsinghua Center for Chinese Statecraft and Public Diplomacy and the project’s leader, noted: “How local governments participate in China-U.S. people-to-people exchanges…will become a major topic in China’s foreign policy studies in the future.”

Zhao concluded by stressing that “the study of subnational government and people-to-people exchanges between China and the U.S. needs to break the boundaries of disciplines, open up theoretical and policy research, and elevate China-U.S. subnational exchanges to become an important focus point for the establishment of a new type of great power relationship between the two countries.”

In July 2015, Tsinghua University published a study conducted by the “Diplomatic Reform Task Force” led by Yan Xuetong, China’s top international relations scholar and key foreign policy adviser, titled “Expanding Subnational Exchanges, Promoting China-U.S. Great Power Relations.” The study was organized into three sections. The first was an analysis of federal-state relations in the American political system and the increasingly important role subnational actors play in the formation of U.S. foreign policy. The second was an overview of accomplishments made as well as issues that existed amid subnational exchanges in the history of China-U.S. relations. The third was a discussion of eight policy recommendations for Beijing to “strengthen U.S. subnational work.” Key excerpts are translated below.

On the one hand, the United States guards against the rise of China, on the other hand, it also needs to cooperate actively and preventively with China. The simultaneous development of competition and cooperation in Sino-U.S. relations can also be influenced by subnational forces in the U.S. … In order to prevent China and the United States from moving towards comprehensive strategic conflict and confrontation, stabilize Sino-U.S. relations, and build a new type of great power relationship centered on no military confrontation, it is necessary to strengthen subnational relations between China and the U.S. …

In order to strengthen the United States’ domestic support for the new type of China-US great-power relationship, China needs to hold a strategically aggressive posture. Emphasis should be placed on gaining and expanding the understanding of and trust in China, as well as support and understanding of China’s policies; constantly cultivating and strengthening positive forces that promote Sino-U.S. friendship and cooperation, while squeezing out negative factors. The strategy should be a multi-pronged approach… striving to win over the American grassroots public at the subnational level’s overall goodwill towards and political understanding of China.

Among the policy recommendations, the study advised tapping the potential and mobilizing the enthusiasm of various subnational forces (including, but not limited to overseas Chinese community organizations) as well as strengthening contact with local media.

Two months after the study’s publication, in September 2015, Xi emphasized the importance of China-U.S. subnational cooperation in a speech given at the third China-U.S. Governors Forum in Seattle before heading to Washington, D.C. to meet with Obama during his state visit. “State-to-state relations ultimately rely on support of the people and serve the people. Provinces and states are closest to the people. Without successful cooperation at the subnational level, it would be very difficult to achieve practical results for cooperation at the national level.” Xi noted: “Over the past 30 plus years, the growth of our relations has been achieved with the support of local governments and their people. Going forward, it will continue to draw strength from and deliver benefits to them.”

Over the past decade, CPAFFC has been arguably the most important organization that spearheaded PRC official subnational outreach in the United States. It is widely known for managing China-U.S. sister city relationships (which has raised concerns for including clauses referencing Beijing’s “One China Principle” in agreements) in collaboration with Sister Cities International (SCI) (who launched a U.S.-China Endowment for Citizen Exchanges in 2019 with primary contributions from CPAFFC) since 2012. CPAFFC also has been co-convening China-U.S. Governors Forums in collaboration with the National Governors Association (NGA) since 2011 (the forum’s establishment was touted by Beijing as “one of the most important achievements” of then-Chinese President Hu Jintao’s state visit).

CPAFFC has also developed long-standing relationships with the Council of State Governments (CSG), and established an official partnership with the National Conference of State Legislatures (NCSL) – a key U.S. organization that coordinates exchanges among state legislators.

On August 18, 2017, at the 2017 Legislative Summit in Boston, CPAFFC signed a Memorandum of Understanding with NCSL to “formalize a two-way exchange program between American state legislators and Chinese members of provincial people’s congresses.” Strong ties have been developed between the two organizations over two decades, specifically since 1996. “NCSL has sent more than a dozen study tours to China, where legislators met with municipal and provincial governments. NCSL and CPAFFC have worked together to send scores of U.S. delegates to Chinese cities and provinces…”

In a January 2020 speech introducing CPAFFC and its leader Li Xiaolin, then-speaker of the Wisconsin State Assembly Robin Vos notably praised: “Madame Li has traveled to more than 100 countries on the face of the planet advocating for her special relationship to make sure that people understand all of the things that China is doing to improve people around the world.” In response, Li expressed her gratitude and said: “In the future, our association is willing to work with NCSL to provide a broader platform for the legislatures of our two countries, deepen our communication, cooperation, and we will try to build mutual trust. Our doors are always open and ready to embrace you with a hug. On behalf of the Chinese people, we always welcome you to visit China.”

In spite of the warm words exchanged then, a broader change of U.S. policy toward the PRC – from “engagement” to “distrust and verify” – was already underway at the time. That included a shift in American attitudes toward U.S.-China subnational exchanges in particular, with such relationships singled out as suspicious and possibly against U.S. national interests. The next article will discuss the dynamics behind that change, as well as the current state of China-U.S. subnational exchanges under the Biden Administration.

Editor’s note: This article is part of an ongoing series published by The Diplomat on “How China Influences Measures and Interferes in Democratic Processes of U.S. State Legislatures.”