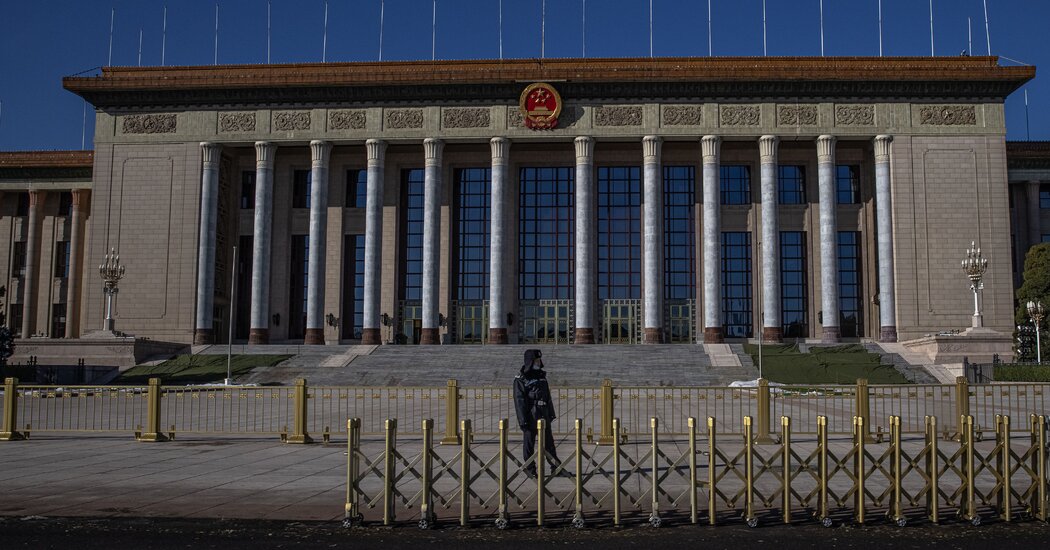 WASHINGTON — The Biden administration said on Thursday that it would put limits on doing business with a group of Chinese companies and institutions it says are involved in misusing biotechnology to surveil and repress Muslim minorities in China and advancing Beijing’s military programs.

In announcing one set of the moves, Commerce Secretary Gina Raimondo said China was employing biotechnology and medical innovation “to pursue control over its people and its repression of members of ethnic and religious minority groups.”

The administration said those efforts included the use of biometric facial recognition and large-scale genetic testing of residents 12 to 65 in the mostly Muslim region of Xinjiang.

China has used such technology to track and control the Uyghurs, a predominately Muslim ethnic group.

In a separate move, Facebook — now called Meta — warned 50,000 users that they may have been the targets of surveillance software, largely by firms that were working for nation-states, and some working for private clients. The company announced that it was banning from its social media sites seven commercial surveillance-for-hire services that target journalists, dissidents and human rights activists.

One of the organizations is based in China, but several were Israeli. Last month, the United States put Israel’s best-known maker of surveillance software, the NSO Group, on the Commerce Department’s “entities list,” banning U.S. companies from selling technology to it and throwing the firm’s financial survival into doubt.

In its announcement on Thursday, the Biden administration said Beijing was using advances in biotechnology to drive forward its military modernization. A senior administration official called out China’s work to edit human genes for performance enhancement and create ways for human brains to connect more directly to machines.

In a coordinated action, the Treasury Department moved to block Americans from investing in securities related to eight Chinese companies — including the drone maker DJI — that the United States says are involved in the surveillance and tracking of the Uyghur minority.

DJI, the largest maker of consumer drones, is by far the most well-known of the companies targeted by the U.S. government on Thursday.

A company spokesman declined to comment on the action, which was reported earlier by The Financial Times. When DJI was placed on the Commerce Department’s entities list last year, the company said it had done nothing to justify the designation.

The Treasury Department said the company provided drones to the Xinjiang Public Security Bureau, which used them to surveil Uyghurs. The department’s announcement suggested that DJI sold the drones to the security bureau, much as it has sold drones to American law enforcement.

The Commerce Department added 40 companies and institutions to its restricted entities list on Thursday, including China’s Academy of Military Medical Sciences and 11 of its research institutes, which are involved in using biotechnology for military purposes. Being added to the list restricts foreign businesses from gaining access to U.S. technology or working with American companies.

The department also added to its list seven Chinese companies and six more from Turkey, Georgia and Malaysia that it said were trying to supply U.S. technology to Iran, items that could support Tehran’s conventional weapons and missile programs.

The moves by the administration came after a report issued in the fall by the National Counterintelligence and Security Center, which highlighted China’s advances in biotechnology and the country’s misuses of those capabilities. In February, the center warned in a bulletin to hospitals and health care companies that concerns about China exploiting health care data “are not hypothetical.”

Beijing, the bulletin said, “has a documented history of exploiting DNA for genetic surveillance and societal control of minority populations in Xinjiang.”

Last year, the Commerce Department added 11 other companies involved in providing genetic analysis of Uyghurs to Beijing. That action included subsidiaries of the Chinese company BGI Group, which had developed a neonatal test in partnership with China’s military that gave it access to the genetic data of millions of people around the world.

Building on those actions, the Biden administration has been putting pressure on Chinese companies involved in key technology sectors including biotechnology, artificial intelligence and autonomous drones.

It also placed SenseTime, a large artificial intelligence firm, on the entities list, forcing the Chinese company to change its plans for an initial public offering. SenseTime’s technology is being used in the facial recognition of Uyghurs, U.S. government officials said.

On Thursday, senior administration officials said the U.S. government was working to try to slow or stop the misuse of new technologies that undermine national security by denying China access to American capital markets and by trying to restrict its ability to use technology developed by U.S. companies.

American intelligence officials say China and the United States are in a biotechnology race, and the country that develops the best technology will have a global advantage.

Biotechnology advances are considered vital for battling future pandemics and developing cures or treatments for a variety of ailments. But American officials have said the technology is ripe for abuse, misuse and unethical behavior.

The Chinese government had not been as constrained by international norms as the United States and its allies. In addition to using the technology to control its population, Chinese government researchers have shown willingness to manipulate human genetics in a way American academics would find unethical, according to American officials.

In its announcement, Meta said a seven-month investigation had concluded that Facebook and Instagram accounts had been used to identify targets for surveillance and build online relationships with them that helped with the installation of surveillance software. Many of the targets were human rights workers or dissidents, but others were journalists and potential political adversaries.

Meta said it removed about 100 Facebook and Instagram accounts linked to “an unidentified entity in China” that was making surveillance software aimed at Apple and Android phones, and computers that ran Windows and Mac OS X, among other operating systems.

Among the seven companies Meta said it was banning from its services was one called Cytrox, believed to be based in North Macedonia, which Meta said had been hired for work in countries allied with the United States — including Saudi Arabia, Oman, Germany and the Philippines. The statement left unclear whether the firm’s clients were states, companies or private citizens.

Meta also said it removed 300 Facebook and Instagram accounts belonging to Black Cube, another Israeli-based firm with offices around Europe. The company is known for “social engineering,” essentially working to gain the trust of a target for intelligence gathering.

The report said the company “operated fictitious personas tailored for its targets,” with some posing as graduate students, human right workers, or film or television producers. They would then set up calls and get personal email addresses in an effort to get targets to click on links that put the surveillance software on their devices.

“There is an entire shadow industry out there that operates around the world,” said Nathaniel Gleicher, Meta’s head of security policy. “People focus on how they exploit vulnerabilities, but it’s the deceptive things they do leading up to that exploitation which we also have to expose.”