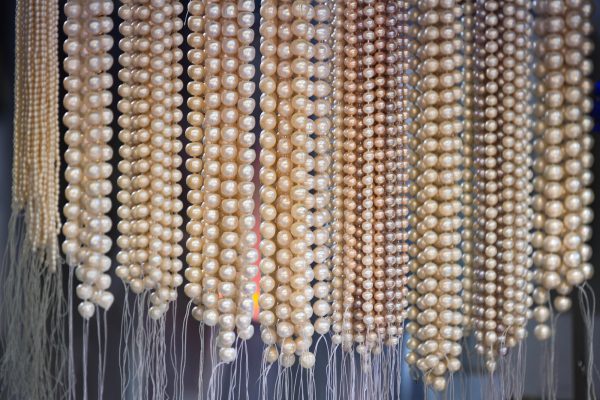 The indicators of the real state of the Chinese economy aren’t only found in the debt, growth, and production output statistics released by the Chinese government.

Indeed, a defining indicator of China’s economic condition can be found in an unlikely product sector: pearl jewelry. Well-to-do Chinese women have significantly reduced their purchases of expensive saltwater pearl jewelry, imported by small Chinese businesses that cater to this niche market. Many small jewelers are on the verge of going under, if they haven’t already.

This trend seems to fly in the face of other statistics, however, such as the South China Morning Post’s recent report that “while retail spending during the pandemic has been sluggish, many Chinese have looked to luxury shopping as an alternative to experiences like holidays.”

According to SCMP, “China accounts for more than a third of the global luxury goods market and its share is forecast to grow as more households earn upper-middle class incomes.”


However, if the luxury goods market is doing nothing but growing in China, as such reports suggest, then why are independent fine jewelry companies in Beijing closing their doors? And what does pearl jewelry tell us that other indicators don’t?

First, and most obviously, declining sales of foreign-sourced and expensive pearl jewelry indicates that buyers are either being more conservative with their disposable income until there is greater certainty over the state of COVID-19 and its effect on the economy, or that they simply no longer have the disposable income.

Second, and more subtly, declining sales of high-end pearl jewelry indicate that jewelry without a famous name – small independent jewelers in China generally don’t have brand recognition – is the most vulnerable sub-sector of the luxury goods market, and is therefore the first to go when money is tight.

Sources who have recently been to Beijing say that markets there that traditionally rely upon a strong international tourist presence are suffering. These markets, particularly Hongqiao on Beijing’s South side near the Temple of Heaven, and Xiu Shui near the Jianguomen Embassy District, are venues that international tour groups and airline crews frequent, buying knock-off handbags, low-cost jewelry, Chinese handicrafts, small electronics, and apparel and accessories.

But the arrival of international visitors to China dropped by nearly 80 percent in 2020. In 2019, more than 145 million foreigners traveled to China; in 2020, that number was just over 27 million, according to Statista.

When these traders fail, it is not just their business which is upended; it usually also affects entire families. The majority of traders in these markets are not from Beijing, and many if not most do not have the legal right to live there either, due to the strict requirements of the household registration (hukou) system. These small business people will usually move back to their home regions in China’s provinces.

However, in the vicinity of the tourist-focused traders are also businesses that cater not only to foreign buyers but to the newly-minted domestic buyers as well. And these home-grown buyers generally represent a completely different demographic from the tourist buyer. The Chinese consumer wants high-end jewelry, including unique and valuable saltwater pearls from the South Seas. These nouveau riche Chinese consumers account for a large percentage of the customer base for expensive pearls and other semi-precious gems. To put it into perspective, a tourist might be looking for a pearl necklace that costs $100 or less. The Chinese domestic buyer is looking for a pearl necklace that costs $1,000 or more.

In fact, pearl strands that originate in places like Tahiti, the Philippines, and Japan can easily retail for $3,000 and up.

The buyers of these expensive pearls are generally women whose husbands own successful small to medium-sized businesses, often manufacturing enterprises. The disposable income afforded these women comes from the profits of those businesses. But rising prices and major disruptions to logistics and the supply chain in many industries has hit such Chinese companies hard. Diminishing orders have created depleted discretionary income.

The Statistics of China’s Economic Decline

Basic statistics tell the story. In the first quarter of 2020 alone, 460,000 businesses permanently closed their doors in China. In all, almost 19 percent of China’s small businesses failed in 2020. These companies often have little success in accessing traditional credit, although the government urged banks to increase their lending to small and medium-sized businesses by over 30 percent, and threw in tax breaks, as well.

The severe decline of business in the high-end pearl jewelry sector is a direct and almost immediate consequence, as well as a bellwether indicator, of these blows to the Chinese economy.

Predictions from the World Bank don’t hold out much hope for a major recovery anytime soon. In fact, the Bank predicts that China’s economy will slow in 2022. Although it points out that the first half of 2021 saw China rebound from the effects of the COVID pandemic, the second half of 2021 saw the economy cool quickly. The Bank also predicts that real GDP growth will go down to 5.1 percent in 2022. For some countries, that would be a welcome level of growth; for China, it is considered sluggish.

“The pearl trade is as vulnerable as any to disruptions in market conditions; perhaps even more so, given that it operates across international borders, from often-remote oyster farms in the Asia-Pacific region, to its chief trading hubs in Hong Kong and Japan and final consumers in Mainland China, Europe, and the U.S.,” reported Australia’s Jeweller Magazine in April 2021.

The article notes that “to a large extent the South Sea pearl business depends on the Hong Kong jewellery fairs, held in March, June and September, as the principal conduit of goods through to the world’s largest South Sea pearl market in China.”

Thus, the cancellation of all three events in 2020 disrupted the market considerably. “That would have been… an enormous problem for pearl farmers who were entirely reliant on the wholesale market,” according to the article. “The big issue for the pearling industry has been getting pearls from the farm to the wholesale market.”

Pearls as an Indicator of the Economy

The pearl is a symbol of all of China’s economic factors combined. Demand for luxurious pearl jewelry from South Seas nations, as well as Japan, was high among newly well-to-do Chinese women, particularly over the last 10 years, until the pandemic hit. If those customers were over 50, these women and their families will likely have grown up poor in hardscrabble conditions. Now able to afford the nicer things in life, they have been able to show and appreciate their wealth by buying luxury goods. But luxury goods that are unbranded, unlike a Louis Vuitton handbag, or a Rolex watch, are more vulnerable to external shocks, and are the first to be forfeited when making purchasing decisions.

When businesses close or profits diminish significantly, the personal disposable income of owners and their families drops with it. The first thing to be taken off the shopping list are the discretionary and expensive purchases. For local Chinese businesses which have come to rely on the domestic luxury goods market sector, however, such as in pearl jewelry, they not only lack “famous name” recognition, but also encounter difficulties of supply which have hurt them immeasurably as they compete with major European and American luxury brands for the disposable income that remains.

When China’s domestic high-end pearl business consumers come back, it will be a strong indicator that the Chinese economy has, too. A “string of pearls” is more than just a term used by international analysts to describe the maritime portion of the Chinese government’s Belt and Road Initiative. Under that definition, the “string of pearls” theory refers to China’s ambition to create a series of ports it can control economically and militarily from South China, through the Malacca Straits, to the Red Sea and up into Europe. Indeed, a genuine “string of pearls” is a small but powerful symbol of the health of the small to medium-sized business economy in China. And as that sector goes, so goes much of the larger economy that depends upon it.