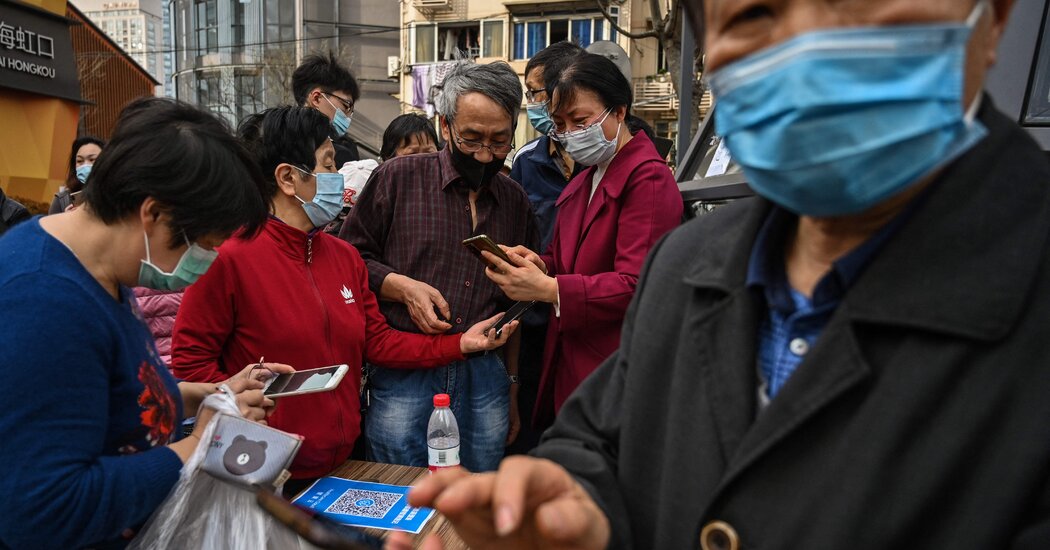 A coronavirus outbreak is ravaging a hospital in Shanghai for older adults, underscoring the difficulties officials have had in containing infections even as the city imposed a 10-day staggered lockdown.

Two orderlies at the Shanghai Donghai Elderly Care Hospital said in interviews that the coronavirus was spreading widely among the mostly older patients in the facility, and that people had died on each of the past three days. The two, who declined to be named for fear of losing their jobs, said that on a recent night they had been asked to carry a body into a room where other bodies were being stored.

The two said they did not know how the people had died, but said that many had been infected with Covid, and that there was a shortage of tests and other resources. The New York Times also spoke with a Shanghai resident, Chen Jielei, who said her 81-year-old mother tested positive for Covid-19 in the hospital.

The situation points to an unfolding health care crisis in China’s largest city, and exposes a vulnerable group in the country’s otherwise highly effective Covid-19 strategy: the elderly.

China’s efforts to eliminate infections with lockdowns, travel restrictions, mass testing and surveillance had largely kept Covid out since it first emerged in the Chinese city of Wuhan two years ago. But with the rise of the highly transmissible Omicron variant, China has in recent months struggled to quash outbreaks. Lockdowns were imposed in major cities like Xi’an and Shenzhen, as well as the entire northern province of Jilin.

In Shanghai, officials have argued the city plays too crucial an economic role to be completely closed down. But the surge in cases prompted officials last week to impose a staggered shutdown. First the eastern and then the western halves of the city were to close businesses, suspend public transportation and confine residents in their buildings so that mass testing could be carried out.

The rollout has been messy. Grocery store shelves have been emptied as residents went on panic buying sprees. People with life-threatening conditions posted calls for help online when they could not get to hospitals for help. Quarantine facilities and hospitals have overflowed with people who tested positive, who must be confined in such facilities even if asymptomatic.

But the crisis in the Donghai hospital exposes a deeper challenge: how to protect older Chinese, who are already more vulnerable to the virus, particularly if they live in facilities besieged by it. Making matters worse, just over half of people 80 and older have had two shots, and less than 20 percent of people in that age group have received a booster, Zeng Yixin, a vice minister of the National Health Commission, said recently.

Officials have pointed to the outbreak in Hong Kong, where deaths spiked in recent weeks, particularly among unvaccinated older adults, as a sign of concern.

It is not clear how many people have died at the Donghai hospital, and whether the deaths are directly linked to the Covid outbreak there, which was previously reported by The Wall Street Journal. A woman who picked up the phone at the Donghai Elderly Care Hospital confirmed an outbreak of Covid there, but declined to say how many cases there were or to provide other details. Bloggers shared photos and descriptions of the outbreak in the Donghai facility on Chinese social media, but it went unreported by official Chinese media. Shanghai has not yet officially reported any deaths from Covid. Calls to the Shanghai Municipal Center for Disease Control and Prevention went unanswered on Friday.

The two orderlies, who shared proof of their work at the facility, said they had been recruited recently to work at the hospital without being told about the situation. They were shocked to find when they arrived that they would be working in a ward filled with patients who had Covid. They said that because they had come into contact with sick patients, they were being confined to the hospital and could not leave.

One night, around 3 a.m., they were woken up by hospital staff and given a duty they said they were not hired to perform: carrying a body away to a makeshift morgue. They said that five of them took the body to a room where a large number of bodies were being stored.

In a different wing of the hospital, Zhang Meizhen, the mother of Ms. Chen, the Shanghai resident, tested positive for Covid-19 in the hospital last week. Ms. Zhang’s symptoms were mild, Ms. Chen said in a phone interview. But she was still worried because there had been no doctors or nurses attending to her, and her mother was not vaccinated.

“The management of their hospital is a mess, and there is no food. They only had their meal at 9:30 last night,” Ms. Chen said. “My mother’s feet and hands hurt, but no one has given her any medicine.”

With much of the city under lockdown, Ms. Chen said she was unable to get to the hospital to visit her mother.

“We are absolutely worried,” she said. “Our family is desperate, we can’t go to see her, and we can’t bring her back, either.”

In another hospital in the eastern part of the city, Shen Li, a 45-year-old businessman, said that his 77-year-old father, Shen Ruigen, had died two days after testing positive. Mr. Shen said that he had not been allowed access to his father’s body or to see his 83-year-old mother, who has been confined in a residential building alone since mid-March.

According to Mr. Shen, his father, who had been suffering from diabetes and kidney failure and needed to take various prescription medicines on a daily basis, tested positive at a hospital in Shanghai on March 26. He went to the Fudan University Affiliated Pudong Medical Center for treatment but was told that he needed to wait for seven to eight hours, because there were more than 400 people in line.

While waiting in line, Mr. Shen ran out of medication. He couldn’t get emergency hemodialysis, a treatment that helps filter his blood. On March 28, his father was transferred to two other hospitals, but his condition deteriorated quickly, and he died of heart failure.

“I haven’t been able to live with the fact that my father died alone,” said Mr. Shen in a telephone interview on Friday. “I could do nothing to stop his death.”

Qin Xianfeng, a local health official in the district of Pudong who Mr. Shen said had been in touch with him about his father’s death this week, declined to comment when reached by telephone on Friday.

Mr. Shen added that he was especially worried about his mother, who was confined at home alone and relied on the daily supply of food from the volunteers at her neighborhood. “We haven’t told her about my father’s death,” Mr. Shen said.

“She couldn’t take it alone,” he said. “There is no one else by her side.”