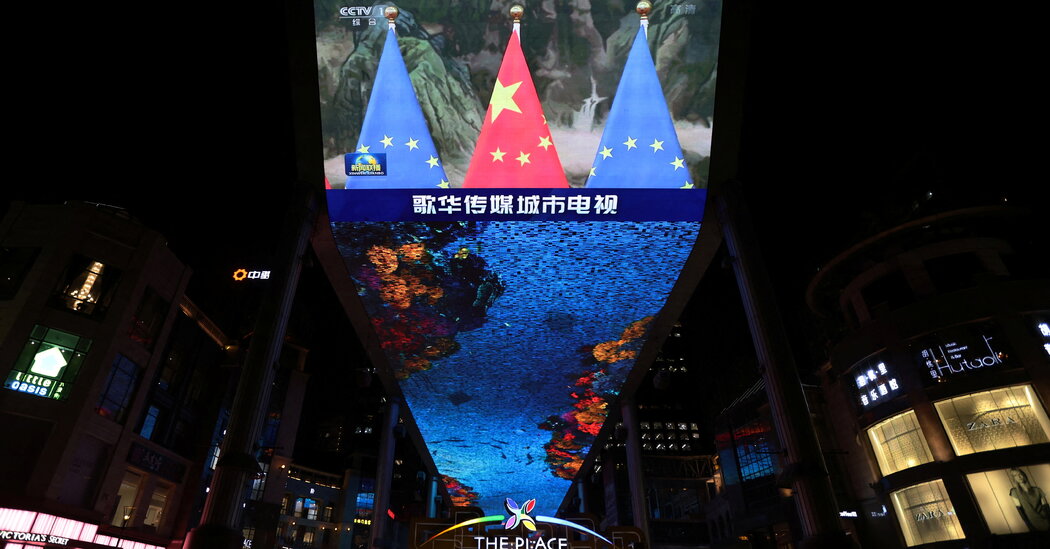 BRUSSELS — The European Union on Friday called on China not to aid Russia’s war against Ukraine or to subvert Western sanctions on Moscow, in the first summit meeting between the two sides in two years.

The summit, in separate sessions with Beijing’s leaders, Prime Minister Li Keqiang and President Xi Jinping, came as tensions were high over Beijing’s support for Russia’s war in Ukraine, China’s record on human rights and its trade boycott of Lithuania for hosting a representative office of Taiwan.

Europe-China relations have essentially been in a deep freeze since the E.U. imposed sanctions on China last year for its abuses against the predominantly Muslim Uyghur minority in Xinjiang, and China answered by penalizing members of the European Parliament.

Friday’s summit meeting produced no joint statement or any specific agreement, and there was no joint news conference. But China and the bloc are each other’s largest trade partners, and China is eager to preserve and enhance its trade with the bloc, but without upsetting its relations with Russia, a friendship it declared had “no limits” just days before the Ukraine invasion.

With tensions high, the main effort of the meeting Friday was to try to manage the relationship with China, E.U. officials said. As expected, the Chinese leaders said that they favored an early peace in Ukraine, but did nothing to pull back from their alliance with Russia.

Both sides agreed that “this war is threatening global security and the world’s economy,” said Charles Michel, president of the European Council, after the virtual summit.

“Any attempts to circumvent sanctions or provide aid to Russia would prolong the war,” he said, leading “to more loss of life and greater economic impact.”

Ursula von der Leyen, the Commission president, said that the Europeans emphasized that “no European citizen would understand any support to Russia’s ability to wage war,” which “would lead to major reputational damage for China here in Europe.”

But China, as a member of the U.N. Security Council committed to upholding international law, could do much good for itself by influencing Russia, its ally, to quickly end the war, she said.

There was little doubt, then, that for the Chinese leaders, economic relations were paramount. In a statement issued by Mr. Xi, he concentrated on mutual cooperation and urged Brussels “to form its own perception of China, adopt an independent China policy and work with China for the steady and sustained growth of China-E.U. relations.”

China has regularly tried to break the European Union’s close relations with the United States, which have only been reinforced because of the war in Ukraine. Mr. Xi mentioned the war in Ukraine only in passing, noting that it came on top of the coronavirus pandemic and slower global growth, while urging Brussels and Beijing to help stabilize “a turbulent world.”

“China has been promoting talks for peace in its own way and will continue to work with the E.U. and the international community to play a constructive role for early easing of the situation, cessation of hostilities, prevention of a larger-scale humanitarian crisis, and the return of peace at an early date,” the statement said.

But as it aligns itself with Russia, China has for the first time criticized the NATO alliance in terms copied from Moscow. Since then, Washington has publicly warned China not to provide any material or financial support to Russia’s war, including helping Russia to avoid Western sanctions.

China has always been eager to divide European Union countries from the United States and even from one another, said Philippe Le Corre, a China expert and a senior fellow at Harvard’s Kennedy School of Government and at the Carnegie Endowment.

But with China’s positions on Ukraine, its “no limits” friendship with Russia, its attacks on NATO, its actions in Xinjiang and Hong Kong, its refusal to let the world investigate the origins of the coronavirus pandemic and its moves against Lithuania, Mr. Le Corre said, “China has an increasingly bad image in Europe, too.”

Consequently, he said, “this meeting seems to have been a dialogue of the deaf.” The Europeans tried to convince the Chinese not to interfere with sanctions against Russia, he said, “but that’s the best they can hope for.”

Still, China seems caught by the difficulties of Russia’s war and embarrassed by the destruction. Foreign Minister Wang Yi has said that China still supports Ukraine’s independence and would work with the international community to call for a cease-fire.

Marriages and divorces. Faced with a soaring divorce rate, China introduced a rule forcing married couples to undergo a 30-day “cooling off” period before formally parting ways. The move seems to have been effective at reducing divorces, but is unlikely to help with a demographic crisis fueled by a decline in marriages.

But two days ago, on Wednesday, Mr. Wang hosted his Russian counterpart, Sergei V. Lavrov, and insisted that relations between China and Russia had withstood “the test of changes in the international situation” and that Beijing wants to take bilateral relations to “an even higher level.”

He added, echoing China’s past language, that “China-Russia cooperation has no limits.”

China is also unhappy with how closely Brussels has aligned itself with Washington over Ukraine. The state broadcaster CCTV wrote in an editorial on Tuesday that Europe, “which has been repeatedly stabbed in the back by the United States,” should not make the same mistakes and be “dragged into danger by the U.S.”

The last summit meeting between the European Union and China was in June 2020. Then in December 2020, just before President Biden took office, the E.U. and China sides signed a Comprehensive Agreement on Investment, a deal that was much criticized by the European Parliament and by Washington.

Later, after China responded to E.U. sanctions over its abuses in Xinjiang by sanctioning members of the European Parliament, the parliament refused to take up ratifying the agreement, which is now considered dead.

One of those sanctioned, Reinhard Bütikofer, a German Green Party member who heads the European Parliament’s China delegation, noted the surprise to Moscow and Beijing of Western solidarity over Ukraine.

The European Union, he said, must “underpin this strategic solidarity with democratic countries by making it clear to the Chinese leadership that any violation of the Western sanctions regime against Russia will have direct consequences.”

Relations are hardly improved by China’s economic sanctions against tiny Lithuania, which last year dared to open a representative office of the Taiwan government, effectively an embassy, and allow it to use the word Taiwan, instead of Taipei, the capital, which China prefers.

While the world considers Taiwan legally a part of China, Taiwan considers itself a separate, democratic nation and has also proved itself vital in producing sophisticated semiconductors, on which Europe depends.

China has not only organized a boycott of trade with Lithuania, but has also attempted to block trade in any goods that use components made in Lithuania. The European Union has brought a case against China in the World Trade Organization, which may take years to resolve and has complicated relations with Beijing.