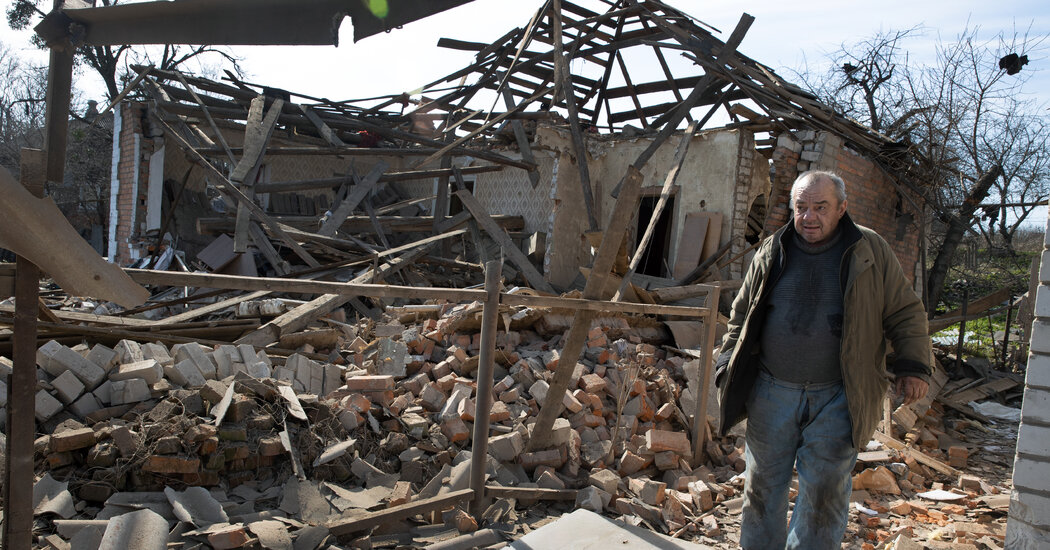 Diplomacy: Prospects for successful peace talks have dimmed: Russia’s foreign minister said Ukraine had proposed a new draft deal that deviated from previous versions, and President Aleksandr Lukashenko of Belarus demanded that his country be included in the negotiations.

State of the war:

Khan in jeopardy after court ruling

The vote, which Khan had tried to block, is widely expected to remove him from office. Should that happen, a caretaker government will be formed and the country will prepare for elections in the coming months.

The Supreme Court ruling is a major victory for opposition leaders, who said that Khan had attempted an “open coup.” New elections would be a test for the coalition of opposition parties, which are typically at loggerheads but have teamed up around the no-confidence vote.

The run-up to the first round of the election has been dominated by issues such as security, immigration and national identity.

Analysis: The military controls the main levers of power, and Khan’s relationship with key leaders soured after he refused to back a new chief of the country’s intelligence agency last year.

Economy: The Pakistani rupee sank to a record low on Thursday. Analysts say the current crisis has further polarized the country and could lead to unrest.

The city of 26 million is confronting its worst outbreak since the pandemic began, and Chinese authorities have deployed their usual hard-line restrictions to curb transmission.

But Shanghai is different. Residents of the city — the wealthiest and most populous in China — are airing their grievances. They have signed petitions to protest a policy that separates infected children from their parents, criticized conditions at isolation facilities and defiantly confronted officials.

Their grumblings could eat away at the central government’s power, as the crisis quickly becomes the most significant political test to date of the country’s zero tolerance approach — a policy on which the Chinese Communist Party has staked its legitimacy.

Analysis: The city is home to a vibrant middle class and also many elites, who are accustomed to a relatively high level of political autonomy.

Background: Officials had insisted that Shanghai was too important to quarantine. “The fact that Shanghai is being locked down suggests that we are pretty close to the red line, to the tolerable limit of how defensible zero Covid is,” a political scientist said.

Here are the latest updates and maps of the pandemic.

Rihanna’s bare-belly maternity outfits are both haute couture and, perhaps, transgressive political statements. As right-wing lawmakers fight to control women’s bodies, Rihanna is “connecting the right to dress how you like with all sorts of other, more constitutional rights,” our chief fashion critic writes. “It’s a pretty radical move.”

Who Is Running for President of France?

The campaign begins. French citizens will go to the polls in April to begin electing a president. Here is a look at the candidates:

A center-right candidate. Valérie Pécresse, the current leader of the Paris region, recently won the nomination of the Republicans by adopting a vocabulary with racial and colonial undertones. She now faces the difficult task of enlarging her support base.

The far-right veteran. Marine Le Pen, who has long used fiery rhetoric to fight her way to power in France, is seeking to sanitize her image. She finished third in 2012 and was defeated by Mr. Macron in the 2017 runoff.

For years, the storied collection of Caracas’s Museum of Modern Art has sat in storage in the midst of a decaying housing complex, as unpaid workers and cultural officials struggled to preserve the collection.

Oil wealth once buoyed the museum, a jewel in Venezuela’s modernization project. But in 2001, the Socialist government launched a “cultural revolution,” turning every institution into an ideological battleground. The art, which includes works by Pablo Picasso, Joan Miró, Marc Chagall and Lucian Freud, got caught in the crossfire.

This February, the museum began a partial reopening after a two-year closure; workers painted galleries and fixed the lighting in a few rooms. The new exhibition is a modest one, with just 86 of the museum’s 4,500 works on display, and reflects the country’s uneven economic recovery.

Experts worry that the collection remains at risk from decay and theft without higher wages and a profound change in how the state views culture. Officials last year earned an equivalent of $12 a month and the museum received a daily budget of $1.50 to maintain its facilities.

“Aline” is a passionate and sometimes-awkward ode to the singer Celine Dion.