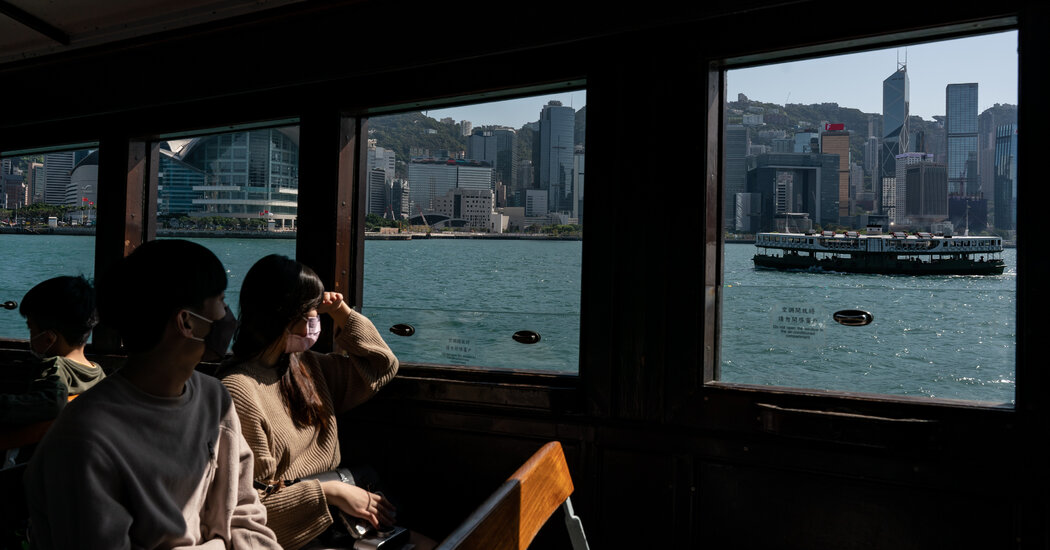 HONG KONG — On a damp Monday morning in Hong Kong, Freeman Ng looked out from the upper deck of the Star Ferry as it approached land. A sailor tossed a heavy rope to a colleague on the pier, who looped it around a bollard as the swoosh of the waves crashed against the green and white vessel pulling in from Victoria Harbor.

Mr. Ng, 43, commutes from Kowloon to Hong Kong Island on the ferry most weekdays. The subway would be much faster, but Mr. Ng prefers to cross the harbor by boat. “The feeling is better on the ferry,” he said, taking in the salt air.

Hong Kong has had many casualties over the last three years. Mass social unrest in 2019 scared off tourists and hit restaurateurs and hoteliers. Coronavirus restrictions wiped out thousands of mom-and-pop shops. But the prospect of losing the Star Ferry — a 142-year-old institution — has resonated differently.

Since the pandemic began, the crowds that Mr. Ng once jostled to squeeze onto the ferry gangplank are gone. There are now so few passengers that the company that owns Star Ferry says the service may soon end, dimming the life of the harbor and the city itself.

“It has so much history,” said Chan Tsz Ho, a 24-year-old assistant coxswain. “In the minds of Hong Kong people, including me, it’s an emblem of Hong Kong.”

Like Hong Kong, the Star Ferry once represented a link between the East and the West. It was the first scheduled public ferry service in 1880 to connect Hong Kong Island to the Kowloon Peninsula, and the Chinese territory beyond it. Its founder, a Parsi baker and businessman, arrived in the city from Mumbai decades earlier as a stowaway on a ship headed to China.

At the time of his arrival, Hong Kong, only recently colonized by the British, was already transforming into a boomtown with corruption, drugs and disease on land and piracy and smuggling on the water. A police force made up of European, Chinese and South Asian officers tried to keep order.

Dorabjee Naorojee Mithaiwala, the ferry’s founder, named his first four vessels Morning Star, Evening Star, Rising Star and Guiding Star. The current fleet includes eight boats that have changed little in the six decades since they were built. All eight have a star in their name.

The Star Ferry grew to become part of the lifeblood of Hong Kong. Residents were so dependent on it that a government-approved fare increase in 1966 led to days of protests, a harbinger of social unrest that spilled over into deadly demonstrations and riots a year later. British officials eventually responded with policy reforms.

The Star Ferry riots came to symbolize the power of protest in Hong Kong, but as the ferry jolted across the harbor on a recent trip, with sailors pulling a chain to lower a red and yellow gangplank, that history appeared unremarkable to the scattered passengers trickling off the boat.

Issac Chan’s first memory of the Star Ferry was five decades ago, when his parents took him for an adventure as a young boy. “It traveled slow, but it was enjoyable. It wasn’t easy to go on a boat on the sea,” he said. Mr. Chan, 58, grew up in the New Territories, near the border with mainland China.

These days, he takes the ferry each morning after his shift as a night security guard in a residential building on Old Peak Road, a well-heeled area where Chinese people were unable to own property for part of British rule. The ride gives him time to unwind at the end of his work day, he said.

When the British handed Hong Kong over to China in 1997, some who had fled to Hong Kong from China during the Cultural Revolution and, later, the bloody crackdown of Tiananmen Square in 1989 feared they would have to flee once again. Instead, life went on and little seemed to change for decades. Hong Kong continued to thrive as a hub for international finance and as a stopover for travelers in Asia.

After the city built a cross harbor tunnel in 1972, other forms of public transport offered faster trips, and the ferry began to rely more on foreign visitors hopping on the boat for a cheap tour of the city. Commuters and touring passengers with cameras around their necks sometimes sat cheek by jowl, taking in the sights of flashing neon billboards, junk boats and shard-like skyscrapers rising toward Victoria Peak.

Yet the Star Ferry would once again witness upheaval.

In 2019, confrontations in Hong Kong between pro-democracy protesters and riot police officers were broadcast around the world. Protesters carrying helmets and protective goggles made their way to demonstrations to demand political freedom from China. Streets once crowded with tourists were shrouded in tear gas.

The confrontations brought on a fierce crackdown from Beijing and marked the beginning of the Star Ferry’s recent financial troubles: The company says that it has lost more money in the 30 months since the protests erupted than it made over the last three decades. Even though the ferries can still be crowded at certain times of the day, especially when the weather is nice, the overall passenger numbers are far below what they were three years ago.

Relations with Europe. Chinese leaders have often viewed Europe as the softer wing of the Western world, unable and unwilling to contest China’s rise. But as the continent reassesses its security needs, that may change — and lead to a more antagonistic stance.

“The company is bleeding hard and we definitely need to find our way out,” said David Chow Cheuk-yin, the general manager. Mr. Chow has appealed to the public through media appearances, hoping that a cry for help will resonate with a deep-pocketed investor in a city built by business tycoons.

When he was asked to take over running the Star Ferry late last year, things were looking up, Mr. Chow said. Hong Kong had declared victory over the virus. Small businesses nearly destroyed by pandemic restrictions that had mostly cut Hong Kong off from the rest of the world began making plans to fully reopen. Some lawmakers even discussed loosening border controls.

“We were talking about recovery when I first took up this role,” Mr. Chow said.

Then Omicron broke through Hong Kong’s fortress walls, forcing restaurants, bars, gyms and schools to close. “Instead of recovery, we are talking about survival mode,” said Mr. Chow. “Everything changed so quickly.”

For Mr. Chan, the assistant coxswain, being a seaman is a time-honored family tradition. His father, also a Star Ferry sailor, regaled him with stories of the sea as a young boy. His grandfather, a fisherman, also shared tales. So when there was an opening for a trainee position at Star Ferry three years ago, Mr. Chan jumped.

The baby-faced boatman, who stands out among the weathered older sailors at Star Ferry, said he would spend the rest of his life on the water if given the chance. His favorite part of the job is navigating the whims of the currents and steering the ferries in challenging weather, carving out different paths each time, he said.

When the fog hangs over the water, hindering visibility in the crowded harbor, he and the crew have to use their ears as well as their eyes to navigate. “You can’t even see the other end of your own vessel,” he said.

Mr. Chan’s young face betrayed a hint of disappointment as he started to explain that his morning shift begins an hour later now because the ferry has reduced its hours. For much of this year it had stopped running two hours earlier at night, too. The sounds of passengers flipping the ferry’s wooden seats are muted.

“Sometimes there is only one or two passengers crossing the harbor,” Mr. Chan said, “but we are a full crew.”