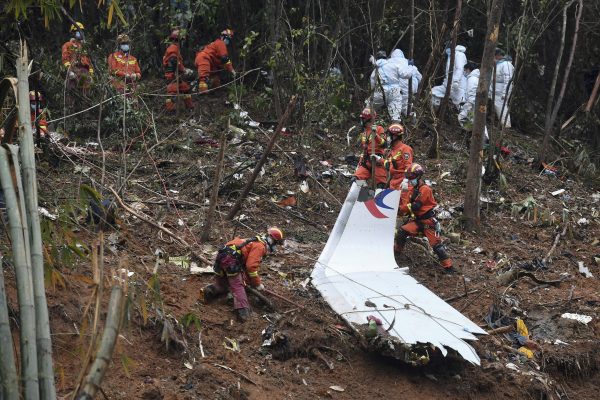 One month after a China Eastern passenger jet crashed mid-flight, killing all 132 people on board, investigators say they have not determined a cause.

A report issued Wednesday by the Civil Aviation Administration of China said no abnormalities had been found in the plane, its crew, or external elements such as bad weather.

The report said investigators are still attempting to extract data from the heavily damaged black box flight data and voice recorders that might offer insight into the plane’s condition and the crew’s actions in the final minutes of the flight.

The U.S. National Transportation Safety Board is helping download information from the flight data recorder and the cockpit voice recorder.


Both black boxes are being analyzed by U.S. experts at a government lab in Washington, D.C.

The China Eastern Boeing 737-800 went into a sudden nosedive, appeared to briefly recover, and then slammed into the ground in a mountainous area on March 21. The crew made no report of problems before losing contact with air traffic control.

The crash left a 20-meter- (65-foot-) deep crater in a mountainside, shattered the plane and set off a fire in the surrounding forest. More than 49,000 pieces of plane debris were found. It took two days to find the cockpit voice recorder and six days to recover the flight data recorder, which was buried 1.5 meters (5 feet) underground.

Flight MU5735 with 123 passengers and nine crew members was headed from the city of Kunming in southwestern China to Guangzhou, a provincial capital and export manufacturing hub near Hong Kong in the southeast.

In addition to analyzing flight data, investigators will continue subjecting wreckage to scientific tests in search of clues, the report said.

China Eastern, one of four major Chinese airlines, and its subsidiaries grounded all their Boeing 737-800s, more than 200 planes, following the crash but have since returned them to service. The airline said the grounding was a precaution, not a sign of any problem with the planes, which are among the most relied upon by airlines worldwide.