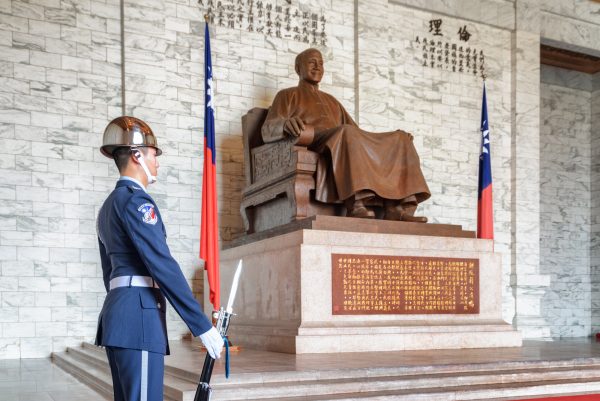 When the Kuomintang-led Nationalist Army lost the Chinese Civil War and fled to Taiwan, millions of soldiers who had been forcefully drafted found themselves forced to accept a new home. These soldiers and their descendants have lived on the island ever since.

The century-old KMT continues to rely on this population as the backbone of its support, even as the cohort ages. As a result, only 3 percent of KMT party members are below the age of 40, making it the oldest political part in Asia in two senses. That generation gap is part of the reason why the KMT has lost ground to its rival, the Democratic Progressive Party, over the last decade.

The Huang Fuxing Department was established by the Kuomintang in the early years to care for veterans. The party department, mostly composed of former soldiers, is known for its radical “deep Blue” political stances on cross-strait issues: It upholds the claim that the Chinese mainland and Taiwan both belong to the jurisdiction of the Republic of China, instead of the People’s Republic of China, and firmly stands in opposition to any form of Taiwan independence.

The “deep Blue” positions of the Huang Fuxing are also shown through their actions within the party. At the Central Committee Hearing of the Kuomintang, representatives from the Huang Fuxing reitrated that the KMT’s full official name – in translation, “the Chinese Nationalist Party” – cannot be altered to “the Taiwan Nationalist Party.” The Huang Fuxing, and by extension the KMT, are holding on tight to their Chinese identity


The party currently has about 370,000 members, and the Huang Fuxing division accounts for about 100,000, or around 27 percent of the total party members. Thus, it plays a key role in both intra-party votes and general elections. The members of Huang Fuxing voted based on instructions from their higher commanders in the past, but now vote based on their personal will. They are known for their high voter turnout rate and their devotion as former military personnel.

With the average turnout for party chair elections at around 50 percent, Huang Fuxing’s votes have been crucial for intra-party elections.

In September 2021, the KMT held its 10th direct election of the party head. Chang Ya-chung, a pro-unification scholar who was a former advisor to 2016 KMT presidential candidate Hung Hsiu-chu, gained nearly 33 percent of the vote, 13 percentage points less than the elected chair, Eric Chu. Chang, however, gained extremely overwhelming support from Huang Fuxing members. While he didn’t win the chair election, Chang’s strong showing among the Huang Fuxing effectively weakened Chu’s authority – Chu was elected chair with the lowest percentage of votes in KMT history.

Chu’s lack of authority later paved the way for a scandal centered on the nomination process within the party in the Taoyuan mayor election. Luo Zhiqiang, currently a city representative, effectively ignored Chu’s demands to withdraw his decision to run for Taoyuan mayor.

But an even bigger problem for the KMT is that its support core, the Huang Fuxing, holds views that strongly conflict with Taiwan’s overall public opinion. With only 16 percent of Taiwanese citizens supporting reunification and an overwhelming 52.7 percent supporting Taiwanese independence, we see a clear divide between the opinion of the general public and the opinion held by those in Huang Fuxing. Clearly, the party members that makes up the backbone of the KMT are both homogenous and politically distinct, having specific political positions that differ greatly from the Taiwanese public.

Even if a radical pro-unification candidate like Chang Ya-chung lost out on the KMT leadership post this time, his strong performance is a sign that, assuming the KMT’s membership structure remains relatively unchanged in the foreseeable future, the presidential election in 2024 is bound to be even more extreme. In both 2016 and 2020, the KMT put forward candidates whose views on cross-strait affairs were viewed as out-of-step with the Taiwanese electorate. Putting forward a similar – or even more radical – candidate in 2024 could lead the KMT to the road of collapse.

The Kuomintang is a century-old party, and reform is bound to be difficult. The Huang Fuxing, as the party’s iron guard, known for its devotion to the party and the country, should take the lead in supporting reform, rather than blocking or opposing change. If the Huang Fuxing cannot be more open to modernization of the KMT’s political positions and demographics, the party will never be able to win the favor of the Taiwanese people again – and both the KMT and the Huang Fuxing will be relegated to history.