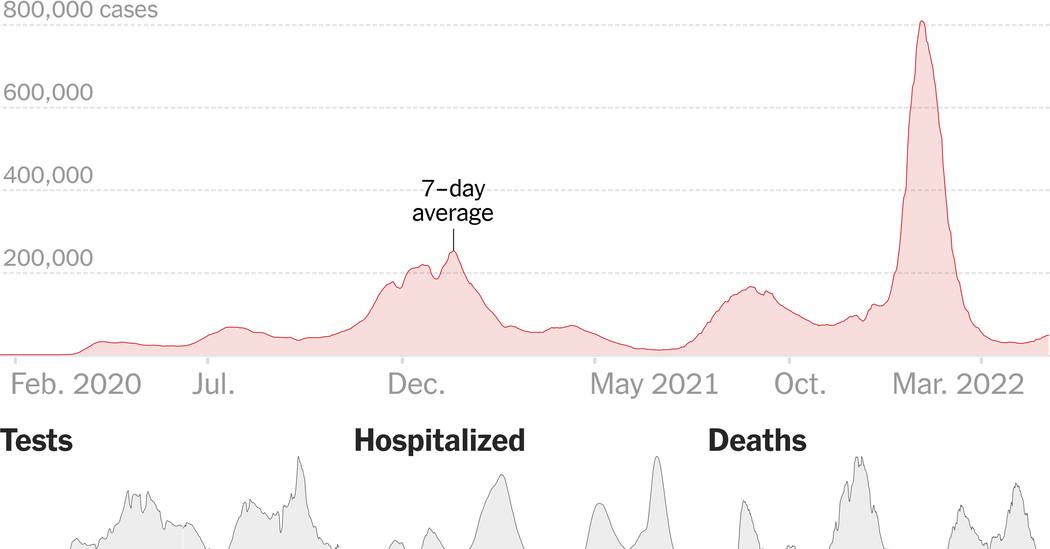 A new coronavirus outbreak in China’s capital has raised concerns that Beijing may become, after Shanghai, the next Chinese megacity to put life on hold to contain the spread of the Omicron variant.

Seventy people have tested positive in Beijing since Friday. In the capital’s fashionable Chaoyang district, home to most of those cases, the government initially ordered all 3.5 million residents to take three P.C.R. tests over the next five days. Bloomberg later reported that mass testing would take place in 11 of the city’s 16 districts.

In other Chinese cities, mass testing in response to a scattering of coronavirus cases has sometimes been a prelude to stringent restrictions — most notably the nightmarish lockdowns that have crippled Shanghai, the country’s largest city, and sent shock waves through the global economy.

In the Chaoyang district in Beijing, grocery stores are staying open late as residents wait in long lines to stockpile food.

Some residents started testing early, hoping to flee on public transit before a citywide lockdown, creating testing center logjams. One Beijing resident, Li Haiqing, woke Sunday to find he couldn’t leave his apartment complex in his neighborhood east of Chaoyang. It is now locked down.

“It took me by surprise,” Li said. “I wonder why it happened so suddenly.” But he had stocked up on supplies on Saturday and was sanguine: “Because there are confirmed cases after all, I think safety is the first priority.”

Vaccinations stall for the poor

Health experts are warning that the global Covid vaccine drive is sputtering out.

My colleagues Rebecca Robbins and Stephanie Nolen report that there is a growing sense of resignation that high vaccination coverage may never be achieved in most lower-income countries, as badly needed funding from the U.S. dries up and both governments and donors turn to other priorities.

Only a few of the world’s 82 poorest countries have hit the 70 percent mark; many have Covid vaccination rates below 20 percent. In some Eastern European and Middle Eastern countries, only a third of the population is vaccinated.

Rebecca told me that it’s no longer just about a shortage of vaccines. Almost half of doses delivered to the African continent have gone unused. In India, the Serum Institute, the world’s largest vaccine maker, stopped producing shots after some 200 million doses piled up.

There is often a “lack of funding for personnel, storage and other resources needed to deliver vaccines and drum up demand,” she said, adding: “There’s also a sense the moment has been missed — higher vaccination coverage could have been achieved last year, when people were more fearful. But vaccines weren’t available to lower-income countries then.”

Reported Covid deaths have been lower in Africa than in other parts of the world, perhaps making people believe that being vaccinated for Covid isn’t necessary.

“We know a huge number of people in sub-Saharan Africa have now been infected,” Stephanie said. “So they’re making the calculation not to prioritize the vaccination — they don’t need to walk five kilometers to a health center, take the day away from work or their fields. They’re seeing in the news that a majority of people had cases and reported deaths are very low, and so their decision-making makes sense in that context.”

The looming question, of course, is whether low rates of vaccination will lead to new, deadlier variants that will circle the world again. “I take very seriously the epidemiologists in Africa and elsewhere who caution that Covid is not over, and we don’t know what the next variant will be,” Stephanie said.

The African Union says it still wants to vaccinate 70 percent of its population by the end of 2022. Public health officials say that the goal may still be achievable, and that it would be unwise and unethical to abandon it. Even if current momentum has been lost, Rebecca said that “the situation is not yet irreversible, but the clock is ticking and other priorities are taking precedence.”

What else we’re following.

After doing “all the right things” (staying home, social distancing when out, wearing masks and getting vaccinated and boosted), we celebrated our upcoming family trip to Disneyland, the day California announced lifting its mask mandate. That was an ill-advised celebration! We both were infected and very sick within two days of returning home. This surge is real and largely unreported because of all the home testing. Our version of this Covid variant was like the flu times 10. We stayed out of the hospital and the morgue, but the experience was painful and a reminder of what we as a nation still face. Stay vigilant! — Jim Kenney, Lexington, Mo.

Let us know how you’re dealing with the pandemic. Send us a response here, and we may feature it in an upcoming newsletter.

Email your thoughts to briefing@nytimes.com. Did a friend forward you the briefing? Sign up here.