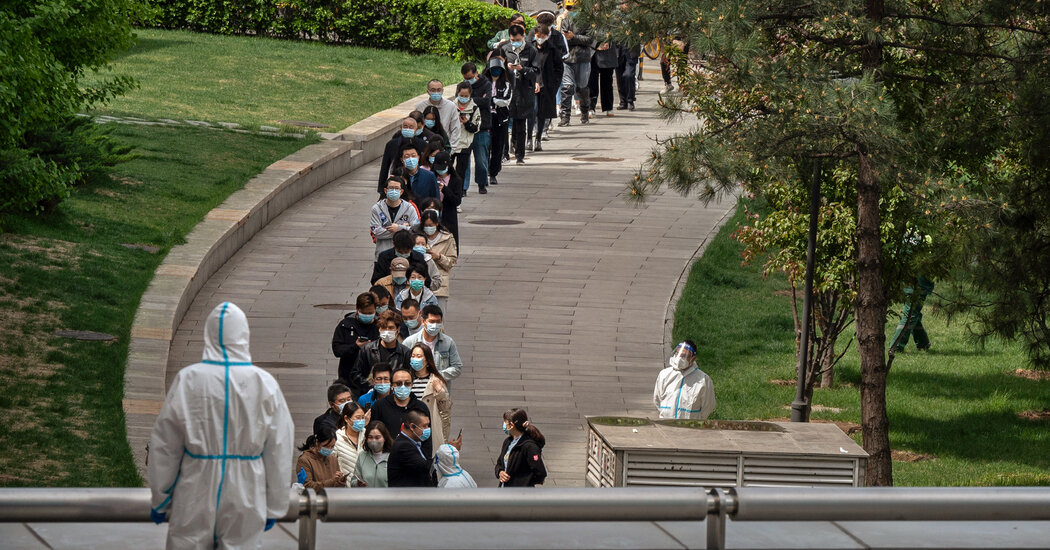 Schools in Beijing, where a coronavirus outbreak has alarmed Chinese leaders, were closed on Friday and dozens of buildings remained under lockdown, as a five-day holiday weekend approached.

The Chinese capital has recorded more than 200 cases since April 22, according to officials — a tiny number most anywhere else in the world, but cause for concern for officials in China, where the coronavirus has been kept largely under control for two years. The central government is still adhering to a policy of trying to stamp out local transmission, rather than living with the virus.

The closure of schools in Beijing came one day ahead of a scheduled five-day break for the May Day holiday. Officials said they would decide later whether schools would reopen next Thursday, as planned.

Officials have also been carrying out several rounds of mass testing this week for nearly all of Beijing’s 22 million residents.

But so far, Beijing has not enacted a citywide lockdown of the kind deployed in Shanghai, which has been struggling to contain its own, much larger outbreak. In that city — where some residents have been ordered to stay home for more than a month — more than 550,000 cases and 337 deaths have been reported, including 52 deaths on Thursday.

The lockdowns in Beijing have targeted individual buildings or streets, perhaps because of the economic cost of the freeze in Shanghai. As of Friday, at least 60 buildings around the city were locked down, along with several additional streets or areas, and many more were under some form of control, according to a tally by the state-run Beijing Daily newspaper. It did not say how many people were affected.

The measures were certain to put a damper on the weekend’s festivities. Among the places ordered closed was Beijing SKP, a major luxury department store. Officials also discouraged people from leaving Beijing or hosting “unnecessary” gatherings. The city’s traffic commission estimated that highway traffic would be about 40 percent lower than over the same period the year before, and that rail, air and other interprovincial travel would also drop sharply.

But the traffic commission also predicted increased congestion during the holiday period, with more residents likely to visit tourist sites within the city. Universal Beijing Resort, a theme park and entertainment complex affiliated with Universal Studios, remained open, though it required visitors to show proof of a negative test taken within the past 24 hours.

Separately, Changchun and Jilin, two cities in the northeastern province of Jilin, began easing lockdown rules on Thursday. They had been under lockdown for nearly two months.

Despite the social and economic costs, Chinese officials have insisted that their strategy of lockdowns and mass testing is the only way forward. On Friday, Li Bin, the deputy director of the National Health Commission, called that strategy China’s “magic weapon.”