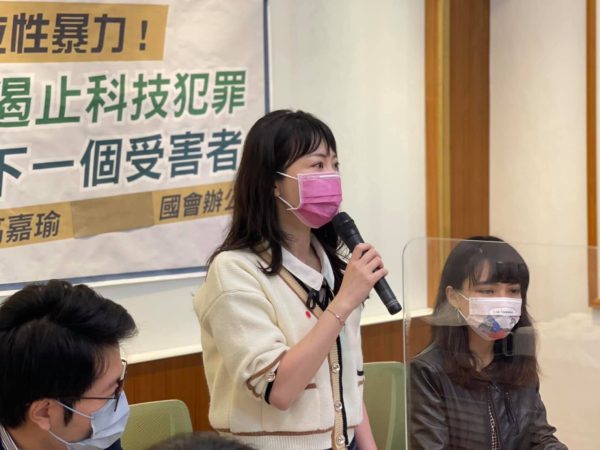 There has been increased discussions of violence against women in Taiwan after Democratic Progressive Party (DPP) legislator Kao Chia-yu revealed that she had been physically assaulted by her partner, Lin Bing-shu, a pan-Green political columnist who writes under the pen name of Raphael Lin. Kao represents the Neihu-Nangang area of Taipei as a legislator.

News of the incident broke after a report published by Mirror Media on November 30. The report stated that Lin beat Kao after finding that she was exchanging text messages with an ex-boyfriend, injuring her face and limbs. The assault allegedly occurred at a hotel in Banqiao, New Taipei, where the two were staying following a campaign rally for the upcoming national referendum. After attacking her, Lin reportedly seized Kao’s phone and kept her confined to the hotel, using private videos taken from Kao’s phone as leverage over her.

Lin, who reportedly has a history of violence against past partners, has denied taking videos or imprisoning Kao.

The incident took place on November 11, with Kao subsequently disappearing from public view for several days. When Kao made a televised media appearance on November 17, she was wearing a medical mask to cover her injuries, despite the fact that current COVID-19 regulations in Taiwan do not require masks to be worn on television programs.

According to the Mirror Media report, Kao emphasized that the matter was a private one when initially contacted by the outlet. However, when contacted again on November 29, one day before the report was published, Kao confirmed that she had been a victim of assault.

On the morning of November 29, Kao filed a police report against Lin. An arrest warrant was granted to prosecutors that night and Lin was taken into custody in the early morning hours of November 30. Charges faced by Lin include assault, forcible imprisonment, and violating personal privacy.

According to radio host Clara Chou, who is known for reporting inside stories about the government and often has high-profile government officials as guests on her program, President Tsai Ing-wen was informed of the incident by national security officials that learned of the assault after Kao sought medical treatment for her injuries. However, Tsai sought to respect Kao’s wishes and tried to persuade her to report the crime.


Kao Chia-yu, 41, is one of the DPP’s rising cohort of younger politicians. Unlike other youth politicians that entered politics in the wake of the 2014 Sunflower Movement, Kao’s political career began far earlier. After a stint as the assistant of then-legislator Luo Wen-jia, Kao became the youngest ever member of the National Assembly in 2005.

By then, the National Assembly was already a defunct institution, and the election was only for the purposes of ratifying constitutional changes already approved by the Legislative Yuan. The National Assembly was abolished later that year, following which Kao successfully ran for Taipei city councilor in 2010, winning re-election in 2014 and 2018. Kao then became a legislator in the 2020 elections.

In Taiwanese media, Kao has sometimes been held up as a standard for the careers of other young DPP politicians to compare to, particularly those who may be well-known public figures but have not actually campaigned for and won office.

Kao is a widely discussed figure in Taiwan. A study of online mentions of Taiwanese politicians in November 2020 found that Kao was only surpassed in mentions by Tsai. At the time, Kao was in the headlines – members of the opposition Kuomintang (KMT) had questioned her real estate holdings when Kao posted a photo of her messy apartment online, as part of a Facebook post drawing attention to the dismal living conditions faced by many young people.

In particular, Kao has at time been a magnet for political attacks from the pan-Blue camp. In another recent example, Taipei Mayor Ko Wen-je attempting to blame Kao for two clinics in Taipei violating vaccination priority order.

Now the domestic abuse accusation has Kao in the headlines again. Among those to criticize the violence faced by Kao include Tsai and Premier Su Tseng-chang. Some politicians crossed party lines to express support for Kao, with KMT legislator Chen Yu-jen making a lengthy post on Facebook supportive of Kao, which also reflected on her own past experiences with abusive partners.

However, in Taiwan’s starkly partisan political environment, other politicians have used the occasion for political attacks on the DPP. Taipei city councilor Hsu Chiao-hsin, one of the KMT’s up-and-coming youth politicians and another young female politician, referred to Lin as “Daluban” (塔綠班) – a pun on “Taliban” (塔利班) used by members of the KMT to allege that members of the pan-Green camp are politically violent.

KMT Central Committee member Huang Chin-wei further raised eyebrows by stating that Kao deserved to be beaten by Lin. Huang’s comments were criticized by KMT chairman Eric Chu; the party issued an official statement and Huang apologized. But Chu also came under scrutiny for using the term “Daluban” to refer to Lin in public comments. Similarly, NPP International Affairs Department Director Jerry Liu came under fire for a Facebook post first expressing sympathy for Kao, but then attempting to steer criticisms toward the DPP.

The incident serves as a reminder of longstanding issues regarding violence against women in Taiwan – even for women in positions of power, such as Kao, and at a time in which Taiwan is governed by its first female president. According to survey data from the Ministry of Health and Welfare, one in five women in Taiwan report having been in abusive relationships.

Statistics show that a case of abuse occurs on average every five minutes in Taiwan, with 322 cases reported per day. According to statistics gathered by the Garden of Hope Foundation, a Taiwanese NGO established in 1988 to help survivors of sexual abuse and domestic violence, around 100,000 cases of domestic abuse were reported per year between 2005 and 2020. As with elsewhere in the world, it is thought that cases of abuse have experienced an uptick since the start of the COVID-19 pandemic. New Taipei reported a 29 percent increase in incidents of domestic violence in March 2020 at the start of the pandemic and, while Taiwan was able to remain primarily COVID-free throughout 2020, such issues likely worsened after Taiwan was hit by its first major COVID-19 outbreak in May 2021.

Taiwan has a reputation for progressive views on sexuality in Asia after becoming the first in Asia to legalize same-sex marriage in 2019. Yet laws criminalizing adultery remained on the books until a May 2020 court ruling, making Taiwan one of the last places in Asia to retain such laws. The anti-adultery laws allowed for a cottage industry of private detectives that stalked, threatened, and harassed individuals – mostly women – in the name of gathering evidence for legal cases. Even after the criminal laws were scrapped, it is still possible for civil cases to be filed for infidelity.

In past years, women’s advocacy groups have also criticized anti-stalking laws in Taiwan as toothless, with light penalties failing to deter individuals from committing violence against women. As a result, on December 1, President Tsai Ing-wen promulgated a strengthened version of the Stalking and Harassment Prevention Act. In comments as she signed the bill into law, Tsai brought up the 1996 murder of Peng Wan-ru, the head of the DPP’s Women’s Affairs Department and a well-known feminist activist.

Yet despite greater awareness of these issues, media coverage of the abuse faced by Kao Chia-yu has itself been sensationalist. Taiwanese media have long-standing issues with misogyny, often providing highly sexualized coverage of female subjects, including in the event of personal tragedy or abuse by their partners. As such, the issues women face do not simply stem from the development of new technology, but return to more deeply-rooted issues in Taiwanese society, inclusive of its media culture.