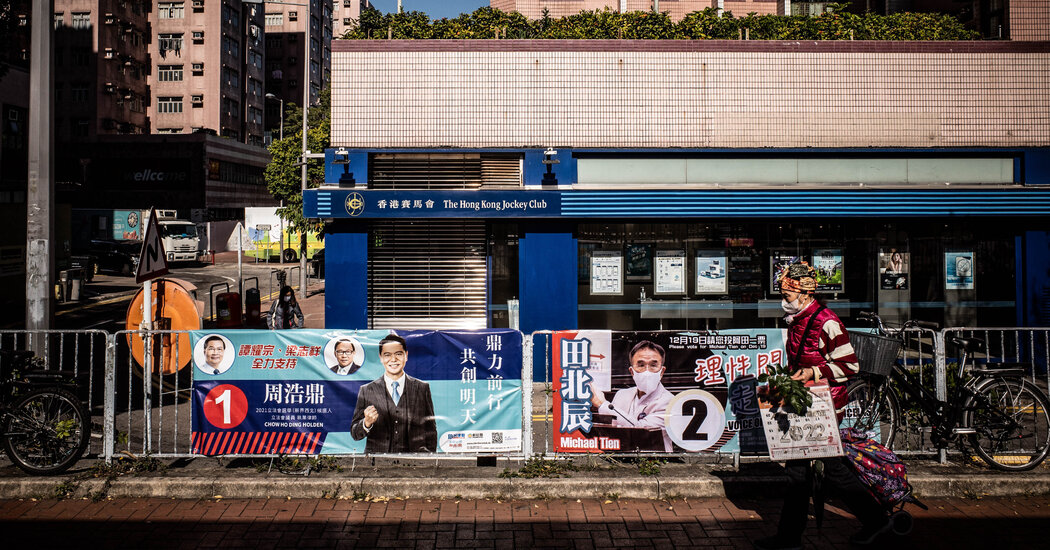 The signs and messages are everywhere: “Cast a vote for Hong Kong and yourself.” Candidates’ faces cover the pavement and walls from the city center to stalls in the wet markets on its outskirts. Government-sponsored billboards calling to “improve electoral system, ensure patriots administering Hong Kong” abound.

Hong Kong and Chinese government officials have for weeks been urging the public to vote in this weekend’s legislative election. But this is not a typical free and fair election: It’s a selection process, thanks to an electoral overhaul with no meaningful participation from the opposition (not least because many are in jail).

The Chinese government wants this election to appear to be successful, as Beijing needs the facade of Hong Kong becoming more “democratic.” If the citizens of Hong Kong skip the vote, it would undermine the election’s legitimacy.

I know firsthand what a meaningful and contested campaign looks like. When I ran in the 2016 legislative elections and won, the atmosphere was electric. Candidates’ teams occupied street corners, and citizens debated their favorites on social media. The whole city was mobilized; citizens could feel the weight of their vote.

What’s taking place now, though, is drastically different. There are no political debates, and candidates are silent about the government’s suppression of the democratic movement.

That’s because this vote will take place two years into Beijing’s crackdown, during which Hong Kong’s autonomy has steadily decreased and critics have been silenced; since the 2019 pro-democracy demonstrations, Beijing has jailed large numbers of activists, protesters and political leaders. Every day, Hong Kong comes closer to resembling another mainland Chinese city.

This will be the first vote to take place after two consequential new measures — part of Beijing tightening grip — that effectively eliminate the checks and balances of government.

The first was Beijing’s imposition of a national security law, which was introduced last year. The law has crumpled civil society and criminalized free speech. It forced the closure of the pro-democracy newspaper Apple Daily, the disbanding of the largest independent trade union and the banning of the annual vigil for Tiananmen Square victims. Recently a protester was sentenced to more than five years in jail for chanting political slogans; no violence was involved.

The second was an electoral reform this year that lowered the proportion of directly elected seats in the legislature from around half to less than a quarter and introduced a vetting mechanism for candidates to ensure they qualify as “patriots” — a vague qualification that serves to eliminate voices critical of China.

John Lee, the chief secretary of Hong Kong, claimed the “improvements to the electoral system” put an end to “turmoil,” yielding “good governance,” but many Hong Kongers think otherwise. Sunday’s election was initially due to take place in 2020, but it was postponed in the name of Covid-related public health concerns — though many believed that the government wanted to wait until the election overhaul was enacted.

Under these measures, the pro-democracy movement is cracked, and democratic leaders have no realistic hopes of entering the legislative chamber.

The few self-proclaimed nonestablishment candidates lack either track records in fighting for democracy or the support of the pro-democracy masses. And many Hong Kongers will be unable to use their votes as a voice or means of expression.

Despite the ubiquitous advertisements from the government, election sentiment in the public has never felt so low.

People do not want to vote for a rubber-stamp chamber and pretend everything is all right.

It’s clear to me that the government of Hong Kong is concerned about a low turnout rate. The authority needs citizens at the voting booths to lend legitimacy to the legislature because only 20 out of 90 candidates are elected by popular vote.

Officials have been trying to counter criticism of the election: Hong Kong’s chief executive, Carrie Lam, claimed that low turnout would reflect voters’ satisfaction with the current government. Mr. Lee defended the elections as “competitive” and free of “traitors.”

These statements reflect the Hong Kong government’s efforts to better align with Beijing’s more extensive propaganda campaign redefining democracy. A new white paper issued by Beijing says China is a “whole-process people’s democracy.” If Beijing can claim itself as a democracy, the logic goes, it can halt criticism of China based on its political ideology.

A “successful” election in Hong Kong helps Beijing propel that narrative: “Democracy” is taking place — despite citizens’ lack of choice in their leadership or representatives — and delivering results for the people. The more that Beijing’s narratives gain traction, the more China’s campaign to undermine traditional democratic systems and values around the world will succeed.

With its legitimacy on the line, there’s little mystery why the Hong Kong government has been overreacting in its defense of the vote — to the degree that it threatened a major newspaper with legal action for calling the election a “sham.”

The news media isn’t the only target. The government made it criminal to encourage others not to vote; at least 10 people have been arrested. According to Hong Kong’s security chief, I “allegedly violated the elections ordinance and possibly even the national security law” for urging citizens to sit out the vote. This essay will almost certainly garner the same response.

My guess is that election turnout will be low. Not because voters are satisfied with the government but rather because they will be refusing to assist Beijing’s attempts to recoin democracy in its own authoritarian terms.

Even though Hong Kong people are silenced, they persist in their passion to stand up for democracy.

Nathan Law Kwun Chung (@nathanlawkc) is a pro-democracy activist and former legislator from Hong Kong living in exile in London. Named one of Time’s 100 most influential people of 2020, he also is the author of the new book “Freedom: How We Lose It and How We Fight Back.”

The Times is committed to publishing a diversity of letters to the editor. We’d like to hear what you think about this or any of our articles. Here are some tips. And here’s our email: letters@nytimes.com.