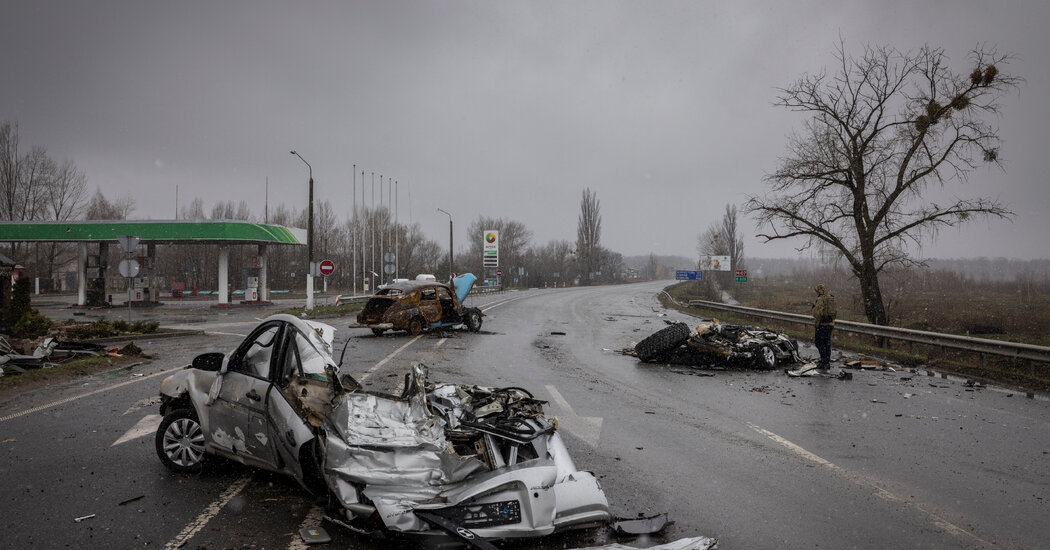 President Biden called the indiscriminate civilian deaths in Bucha a “war crime” and said the U.S. would impose additional sanctions on Russia. Some European leaders also demanded tougher sanctions, including a total ban on Russian fuel imports. Here are the latest updates.

Moscow has denied that its soldiers had anything to do with the atrocities, which have come to light as Russian forces retreat from Kyiv. The Kremlin accused the West of fabricating evidence of the killings, and Russian officials said anyone attributing them to their country’s actions could face prosecution.

But a review of satellite images and videos by The Times shows that many of the civilians were killed more than three weeks ago, when Russia’s military controlled the town. There were bodies in the streets as early as March 11, well before Russia says it “withdrew completely” from the town.

Bucha: A mass grave filled up in the small town north of Kyiv after the morgue, forced to operate without electricity, became intolerable. “They shot everyone they saw,” a woman said.

Response: Germany, France and Lithuania are expelling Russian diplomats. The U.S. ambassador to the U.N. said that America and its allies would seek to suspend Russia from the U.N. Human Rights Council.

China: The Communist Party is mounting an ideological campaign to build popular support for Russia.

State of the war:

On Monday, Carrie Lam announced that she would not seek a second term as the leader of Hong Kong. Lam, 64, cited family reasons, but critics said the final straw was her failure to guide the city through a Covid outbreak that killed more than 8,000 people in two months.

With each crisis, Lam tried to serve the will of Beijing, which controls the territory. Critics say she oversaw a systemic backslide of personal liberties, further isolating Hong Kong from an international community leery of China’s growing authoritarian grip.

Data: At one point, the city’s coronavirus fatality rate was among the highest in the world, in large part because many older people were unvaccinated.

Here are the latest updates and maps of the pandemic.

No ruling on no-confidence

Pakistan’s Supreme Court adjourned Monday after a hearing on whether lawmakers can hold a no-confidence vote regarding Prime Minister Imran Khan.

On Sunday, Khan dissolved Parliament and called for new elections after he and his allies blocked the vote that was widely expected to remove him from office.

The justices are expected to issue a verdict in the coming days. There are three possible outcomes:

Details: Many constitutional experts believe the court will rule against Khan. But the verdict is far from certain.

Maneuvering: On Monday, Khan appeared to push ahead with his plans to hold early elections: He took steps to establish an interim government and called for a protest in the capital, Islamabad.

Many Brazilian companies are seeking out Black and Indigenous workers to diversify their ranks and reverse the country’s deep inequality. After activists sued LinkedIn for removing job ads that sought candidates of color, the company changed its global policy.

Fashion flourished, too: “If there was a theme to the night, it was an exuberant anything-goes attitude that was not a bad reminder of why red carpets are fun in the first place,” our chief fashion critic writes.

For more: Here’s a red carpet slide show and the best and worst moments.

That’s it for today’s briefing. See you next time. — Amelia

P.S. Our China team is changing: Keith Bradsher will become our Beijing bureau chief, to be joined there by Vivian Wang. Alexandra Stevenson will move to China as our new Shanghai bureau chief and Daisuke Wakabayashi will relocate to Seoul.

The latest episode of “The Daily” is about Donald Trump and the 2020 election.

You can reach Amelia and the team at briefing@nytimes.com.